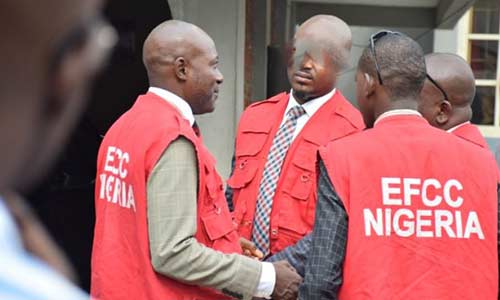 The Economic and Financial Crimes Commission (EFCC) has said that Lagos indigenes alerted the agency of the alleged N127 million fraud at the Lagos State Scholarship Board.

Mr Usman Adamu, an Investigator with the anti-graft agency, made the submission before an Ikeja Special Offences Court.

Adamu testified during a trial-within-trial of Stephen Oshinowo, former executive secretary of the board.

Oshinowo is being charged on eight counts of criminal conversion of N127 million belonging to the scholarship board.

Led in evidence by EFCC Lead Prosecutor, Mr A. O. Mohammed, Adamu said he was the head of the team that investigated the allegation of embezzlement of funds at the board.

“Sometime in 2019, the commission received intelligence from some citizens, alleging that money meant for payment of students’ scholarship was diverted by the board.

“They alleged that the diversion was done in connivance with some staff of the board.

“We investigated the claims, and in the course of our investigation, we invited the defendant and his wife and they reported to our office on November 26, 2019.

“During our discussions with him, we informed him about the accusation against him and some of his staff; we told him to respond and he responded in writing,” Adamu said.”

The investigator said that Oshinowo wrote his statement in the presence of his wife and two lawyers, adding that he was not coerced or tortured to give the statement.

On that same day which was November 26, 2019, we could not finish. The defendant complained that he was tired of writing.

“The following day, statement-taking was continued and he was served with bail conditions,” Adamu said.

While being cross-examined by defence counsel, Mr Lawal Pedro (SAN), Adamu denied knowing that Oshinowo became ill while in the custody of the EFCC and had to be taken to a hospital for treatment.

“The state government did not complain, it was the general public that complained. The money is for Lagos State citizens,” the witness said.

Justice Oluwatoyin Taiwo adjourned the case until March 31 for the continuation of the trial-within-trial.

During proceedings on February 22, another EFCC investigator, Mrs Moday Moley, told the court how Oshinowo allegedly mismanaged the scholarship fund.

“Some of the funds were meant for staff welfare and office renovation but he converted the same to personal use.

“Investigation also revealed that the defendant sent part of the fund to his wife, Adenike, paid for flight trips, supermarket transactions and kept other funds in a fixed deposit account.

”The defendant is the final signatory of the board’s account at the bank; without his signature, no transaction can take place,” Moley said.