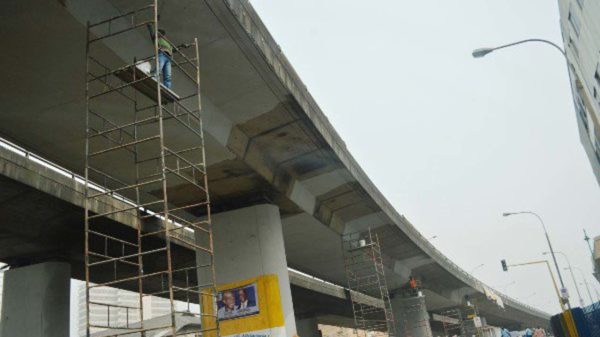 Speaking at the inauguration, Sanwo-Olu said that the flyover would reduce travel time and save man-hour that would have been otherwise lost to traffic on the road.

He said it would provide better riding surface, leading to reduced maintenance cost; boost interconnectivity and generally make life more meaningful to commuters in the state.

According to him, government will prioritise continuation of strategic ongoing roads and link bridges as well as development of new roads.

”One of the most critical challenges being experienced on a daily basis by residents/road users along the Agege Pen Cinema area over the years is the heavy traffic volume occasioned by the geometric increase in traffic.

”Residents and road users along this area have clamoured for a solution to the suffocating nature of the perennial traffic gridlock occasioned by the huge human and vehicular traffic, flowing through this intersection.

”To address the challenge of this huge traffic burden, our administration decided to continue with the construction of a Precast and Pre-stressed Reinforced Concrete Dual-carriage Flyover and Ramp, with road works, across the Agege Pen Cinema Intersection which was then at about 20 per cent completion.

”This is in line with the first pillar of the T.H.E.M.E.S Agenda which targets the provision of roads as a critical infrastructure that will support economic activities.

“It will also enable commercial interactions and ensure ease of commuting from one part of the state to another through elimination of traffic gridlocks,” he said.

Sanwo-Olu said the bridge alignment was along Agunbiade Street (along Oke-Koto junction) and spanned across the intersections of Old Abeokuta Road, Railway Corridor and Iju-Ishaga Road and terminated near the entrance gate of Ijaiye Low Cost Housing Estate along Oba-Ogunji Road.

He said the bridge was also designed to convey traffic from Oba-Ogunji Road into Old Abeokuta toward Abule Egba through ramp across Railway Corridor.

According to him, this ramp will greatly enhance vehicular movement toward Abule Egba, Fagba and its environs, just as it will reduce incessant traffic gridlocks being experienced over the years in the area.

“It also shows a component of continuity in governance,” he said.

The Special Adviser on Works and Infrastructure, Mrs Aramide Adeyoye, said that the project in its entirety consisted of a dual carriageway 1.4km Flyover Bridge component with two lanes of 3.65m width each in either direction with ramps, including the rehabilitation of five adjoining roads.

She said the dual carriageway flyover was another infrastructure investment effort of the administration to support businesses, promote economic development and ultimately improve the socio-economic well-being of Lagosians.

Adeyoye said the solution to this traffic/transport problem was conceived in September 2017 in the construction of a flyover across the Pen-Cinema intersection in addition to the spur linking old Abeokuta Road.

Earlier, the Speaker, Lagos State House of Assembly, Mudashiru Obasa, said the project was moved by him in the assembly, being from Agege constituency.

Obasa said the completion of the project showed the collaboration and strong relationship that existed between the legislature and the executive.

He said that 50 streets had so far been tarred in the area, while requesting that more should be done for the people of the area.