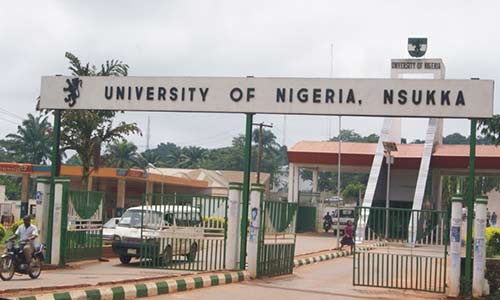 In suit No N/86/2020, before an Enugu State High Court sitting in Nsukka, the community is also seeking a perpetual injunction restraining the University from continuing the construction of an 11,900-room hostel.

The suit filed by Hon. Nnaemeka Aleke for himself and on behalf of the Ajuona Obukpa Autonomous Community has the University of Nigeria, Nsukka and Viagem Property and Investment Limited as defendants.

In a statement of claim filed on behalf of the plaintiffs by their lawyer, Barr. C.I. Odo, they claimed that “the on-going hostel construction project being carried out by the UNN had created erosion menace in the houses and properties of Ajuona Obukpa Community destroying their houses, roads, lands and becoming a source of mosquito infestation and bites that has now given room to malaria as a common sickness in the community.

“The plaintiff avers that the roads leading into and out of Ajuona Obukpa Community are devastated.

“The plaintiff states that he and his community have suffered unquantifiable damage to their properties and have equally suffered distressing damages generally and the environment gradually becoming uninhabitable due to the construction activities of the 1st defendant, which is becoming worse by the present construction by the 2nd defendant for the 1st defendant.”

They sought an order of the Court “directing the 1st and 2nd defendants to stop forthwith the building of the 11,900-room hostel capacity until they control the erosion from its premises devastating lives and properties in the Ajuona Obukpa Autonomous Community being its host.

“An interlocutory injunction restraining the defendants, particularly the 2nd defendant forthwith, from the construction of the 11,900 rooms hostel capacity being constructed in the premises of the 1st defendant or any other construction work in the University pending the hearing and determination of the substantive suit.

“An order of the court awarding damages of N100,000,000.00 (one hundred million naira) only, against the defendants jointly and severally in favour of the plaintiff and his community for the injuries they have suffered over the years as a result of the nuisance created by them.”