CJ accuses Akeredolu, Assembly of alleged plot to unseat her
Editor
February 26, 2021
6:53 am 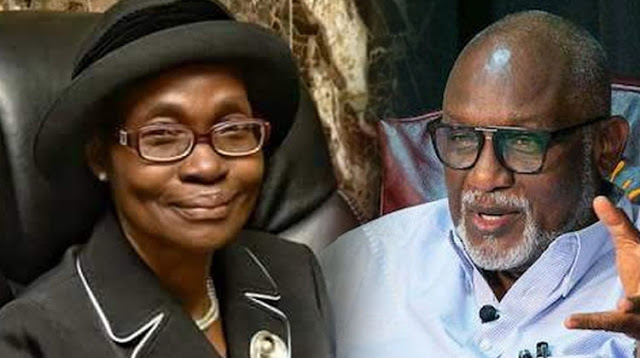 A Federal High Court in Abuja on Thursday restrained the Governor of Ondo State, the state House of Assembly, Attorney-General and three others from taking any further steps in relation to the alleged probe of the Chief Judge, Justice Oluwatoyin Akeredolu, over a viral video made by one Olupelumi Fagboyegun.

Also restrained are the Attorney-General of the Federation, the National Judicial Council and the Inspector-General of Police.

Justice Inyang Ekwo gave the order in his ruling on an ex-parte application filed by Justice Akeredolu, who alleged, among others, that the decision by the state government, through its former AG, Charles Titiloye, to refer the allegations made against her and the state’s judiciary by Fagboyegun in the viral video to the House of Assembly for investigation, was an illegal act designed to remove her from office.

The judge granted all the four principal reliefs contained in the application moved by the plaintiff’s lawyer, Jibrin Okutepa (SAN), and ordered the service of all originating processes in the suit on the defendants and adjourned the case till March 5, 2021 for hearing of the plaintiff’s motion on notice.

Okutepa said, “He said, “We fear that if there is no intervention of the court, we think it is a ploy to get her out of office. We believe it has political undertone.”

In the main suit, the plaintiff is contending that the Ondo State governor, the AG and the House of Assembly lacked the powers under the Constitution to investigate the Chief Judge for any allegation of professional misconduct.