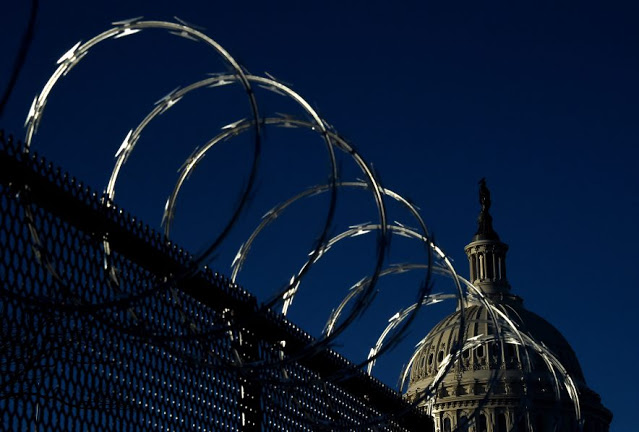 By AFP
Enhanced security measures should remain in place at the US Capitol amid threats by militia members to stage an attack during President Joe Biden's expected State of the Union address, the acting Capitol police chief said Thursday.
"We know that the insurrectionists that attacked the Capitol weren't only interesting in attacking members of Congress and officers," Yogananda Pittman said at a congressional hearing into the January 6 attack on the Capitol by supporters of then-president Donald Trump.
"They wanted to send a symbolic message to the nation as to who was in charge of that legislative process," she told lawmakers.
Pittman said a robust security posture should remain at the Capitol ahead of Biden's first State of the Union address to a joint session of Congress, which has not yet been scheduled.
"We know that members of the militia groups that were present on January 6 have stated their desire that they want to blow up the Capitol and kill as many members as possible with a direct nexus to the State of the Union," Pittman said.
"So based on that information, we think that it's prudent that Capitol police maintain its enhanced and robust security posture until we address those vulnerabilities going forward."
Following the January 6 attack, fencing has been erected around the Capitol grounds, and National Guard troops have been deployed to back up the Capitol police force.
During the hearing, Pittman and the acting House sergeant at arms addressed intelligence and communications failures connected with the January 6 attack on the Capitol, which left at least five people dead.
Trump supporters stormed the Capitol in an attempt to prevent Congress from certifying the results of Biden's victory in the November 3 presidential election.
Trump was impeached by the House of Representatives for inciting the attack on the Capitol but acquitted by the Senate.
Pittman estimated during the hearing that more than 10,000 protesters had entered the Capitol grounds on January 6 and that approximately 800 had actually entered the Capitol building.
In this article:
Category : Uncategorized
Tags : Biden Capitol police Trump US Capitol worldd
PreviousPriest accused of sex abuse was told to pay 20,000 euros
NextICPC recovers $919,207 from Court registrars