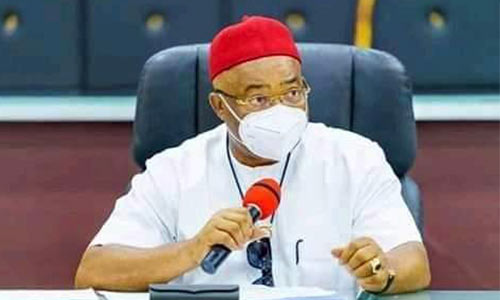 — Says State’s Civil Service Is The Weakest Link In His Drive To Put State Back on Track.

Governor Hope Uzodimma of Imo State has pledged to partner with the Nigerian Bar Associ­ation (NBA) Owerri branch in the members quest to immortal­ise the late Nigerian Ambassa­dor to the United States, former Justice Sylvester Nsofor.

Governor Uzodimma gave the assurance on Monday when he received in audience the officials of the NBA, led by Barr. J.I. Ogamba.

The governor who said no honour done Justice is small urged the NBA to properly develop the concept of how it wants to immortalise Justice Nsofor to as to enable govern­ment consider the budgetary implications.

Governor Uzodimma also promised to critically look at the other demands made of him by the lawyers and assured that he will not dis­appoint their reasonable ex­pectation as an elitist organi­sation while also not ignoring the other sectors of the state.

The governor took time to brief the NBA on the state of affairs in Imo, stressing that the state was removed from the track making it difficult for things to be done properly for years.

He said his priority is to re­turn the state to the track by developing working data, plan­ning with the data and setting in motion an operation that is development- oriented.

Governor Uzodimma regret­ted that the state’s civil service is the weakest link in his efforts to redirect the state to track be­cause of the penchant of the civil servants for corruption.

He said the much his gov­ernment has been able to do in the judiciary is because Covid-19 pandemic had not caught up with the state so badly and assured that better days are ahead because the situation will not last for ever.

On the assassination of the former NBA chairman, Barr. Ndionyenma Nwankwo, the governor said the manner he was killed left him speechless and reminded him of how wick­ed some people can be.