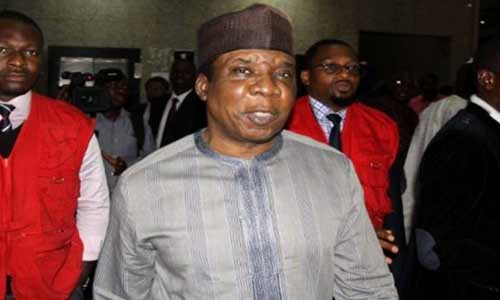 The defendants are facing prosecution by the Economic and Financial Crimes Commission (EFCC) on amended nine-count charge, bordering on alleged money laundering and procurement fraud to the tune of 1.6billion dollars.

At Monday’s hearing, the extra judicial statement made by another witness, Kehinde O, an Estate Manager and Developer with YS Construction Company, was admitted in evidence.

Earlier, the prosecuting counsel, Mr Rotimi Jacobs, SAN, told the court that the two witnesses he had scheduled to call were both indisposed

“We wanted to call two witnesses whose information has been front loaded but one of the witness says he has throat problem and the other says he is in isolation, having tested positive for COVID-19.”

He said that in order not to delay proceedings, the prosecution substituted the name of the witness with the throat problem with that of Kehinde O. who was in court.

Justice Nnamdi Dimgba adjourned the matter until Feb. 23 for continuation of hearing

On the last adjourned date, a prosecution witness, Abdulrasheed Bawa, who is an investigator with the EFCC, told the court that Omokore, bought properties for former minister of petroleum resources, Diezani Alison-Madueke.

He tendered documents in respect of the properties and they were admitted in evidence. .(NAN)