Procedure for challenging correctness of a record of appeal
Editor
February 16, 2021
6:05 am 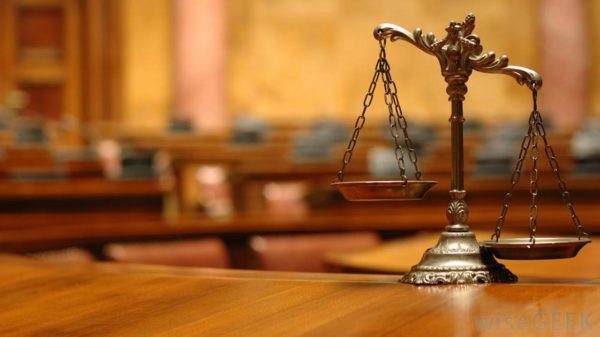 In the Lagos Judicial Division

At the High Court of Lagos State, the claimant claimed, among other reliefs, for: 1. The sum of N23, 705,173.33 being the balance of their indebtedness to the respondent as at February 28, 2003 arising out of a short-term loan facility granted to the appellants by the claimant on December 16, 1996. 2. Interest on the said judgment debt at the agreed rate of 21 per cent per annum from February 28, 2003 until judgment and thereafter at the same rate until full liquidation.

The Court determined the appeal on the following issues: 1. Whether the High Court was right in entering judgment in favour of the respondent in line with the provisions of Order 60 of the High of Lagos State (Civil Procedure) Rules, 1994. 2. Whether at the time the judgment was delivered on 16/7/2003, there was before the High Court an Intention to defend the action and a counter affidavit showing any defence.  3. Whether the High Court was right in assuming jurisdiction over the 2nd appellant when in all the transaction, he was just the sub-lessor.

Arguing the issues, counsel submitted that the refusal or failure of the High Court to consider the counter affidavit and their Notice of Intention to defend the suit was a wrong approach and, on that ground alone, the appeal should succeed on the basis of lack of fair hearing. He relied on Socfin Consultant services Ltd vs. Asuamah (2002) FWLR (Pt.130) 1729; Abia State Transport Corporation vs. Quorum Consortium (2003) FWLR (Pt.151) 1975; Ofomata vs. Onwuzuligbo (2002) FWLR (Pt.89) 1246.

Counsel further argued that on the principle of novation, misjoinder of parties and special circumstances, the High Court should not have assumed jurisdiction over the matter especially since the 2nd appellant was not a party to the transaction. Counsel argued that since there was a transfer of the burden of the 1st appellant to another company T.A.C., a sister company of the 1st appellant which took over the liability of the 1st appellant with the knowledge of the respondent, it was wrong to have sued the 2nd appellant as based on the principle of novation, the proper party to sue should have been the company. Therefore, for suing the wrong party, the High Court had no jurisdiction over the suit. Counsel referred to Sofekun vs. Akinyemi (2002) FWLR (Pt.104) 592; Madukolu vs. Nkemdilim (1962) 2 SCNLR (Pt.348) 341; Funduk Engineering Co vs. Mcarthur (1995) 4 NWLR (Pt.392) 640. Concluding arguments, Counsel argued that the High Court should not have embraced speed at the expense of justice, relying on Menkiti vs. Menkiti (2000) FWLR (Pt.2) 293; Maharaj vs. A.G. (Trinidad & Tobacco) (1977) 1 ALL E.R. 411.

In response, counsel for the respondent argued that on the return date fixed for an action under the undefended list, what is required of the defendant is to file the Notice of Intention to Defend along with affidavit showing good defence to the action. It is on the strength of those documents that the case will be transferred to the general cause list. Counsel submitted that the appellants did not file any of those processes when judgment was delivered on 16/7/2003. Counsel relied on Ben Thomas Hotel Ltd vs. Sebi Furniture Co Ltd (1989) 5 NWLR (Pt.123) 523; U.T.C. (Nig) Ltd vs. Pamotei (1989) 2 NWLR (Pt.103) 244; Nya vs. Edem (2000) 8 NWLR (Pt.669) 349. Counsel further submitted that the appellants cannot complain of fair hearing as they were given time to present their case, that is, to file the Notice of Intention to Defend, which they did not file. Counsel relied onGovernor of Oyo State vs. Folayan (1995) 8 NWLR (Pt.413) 292; Reynold Construction Company Ltd vs. Okpegboro (2000) 2 NWLR (Pt.645) 367. Counsel argued that the failure to file the Notice of Intention to Defend and counter affidavit to the motion of the respondent amounted to an admission of the case of the respondent and therefore the High Court was right to deliver judgment in favour of the respondent. Counsel cited Ajomale vs. Yaduat (No. 2) (1991) 5 NWLR (Pt.191) 266; Ekpeto vs. Wanogho (2004) 18 NWLR (Pt.905) 394 in support.

Going further, counsel submitted that adjournment is not granted as of right as the Court must consider the interest of the other parties to grant or refuse a request for adjournment. Counsel cited Alsthom S.A. vs. Olusola Saraki (2005) 3 NWLR (Pt. 911) 208; Okotcha vs. Herwa Limited (2000) 15 NWLR (Pt. 690) 249.

Resolution of the issues

On issues 1 and 2, the Court stated that according to Order 60 Rules 1, 3 and 4 of the High of Lagos State (Civil Procedure) Rules, 1994, a plaintiff who intends to institute an action under the undefended list shall obtain an exparte order for leave to issue the writ of summons and to place same under the undefended list. The application will be granted if the Court is satisfied that the claim is on liquidated monetary demand which the plaintiff believes the defendant has no defence to stating therein the grounds upon which the belief is based. After service on the defendant, if he intends to defend the action, he shall file in the Court registry a notice in writing of the intention to defend the suit and file along with it an affidavit disclosing a defence on the merit. If the Court is satisfied that there is a defence not necessarily on the merit, the Court will give the defendant leave to defend the action and the case will be moved to the general cause list from the undefended list. See Bona V. Textile Ltd & Anor vs. Asaba Textile Mill Plc (2012) 12 S.C. (Pt. 1) 25.

The Court then proceeded to examine the record of appeal which revealed that the appellants did not file any Notice of Intention to Defend. They only filed a memorandum of appearance. Counsel to the appellants thereafter sought for an adjournment on the ground that he was not ready for the case, which the High Court refused because it considered the reason for the application for adjournment as frivolous. The respondent thereafter moved the High Court to deliver judgment in its favour and the High Court adjourned the case for a period of about two months for judgment. On the date for judgment, counsel to the appellants sought another adjournment in order to file their Notice of Intention to Defend on the ground that the management of the 1st appellant is based in Abuja which resulted in the delay. The High Court refused the application for adjournment and proceeded to deliver judgment.

As regards the 2nd appellant, the Court examined the records and found that the 2nd appellant filed a Notice of Intention to Defend on the date for judgment. However, as at the time the case was called and judgment delivered, the Notice of Intention to Defend was not before the High Court and counsel did not inform the Court that the process had been filed, but rather applied for an adjournment to enable him file the processes.

Applying the above to the instant case, the Court held that the appellants, who appealed on the ground that the failure of the High Court to consider their Notice of Intention to Defend amounted to a breach of their right to fair hearing, were not denied fair hearing as they were afforded enough time to present their case but failed to do so. For the 1st appellant, the Court held that the failure to file a Notice of Intention to Defend amounted to an admission of the respondent’s case. SeeAbia State Transport Corporation & Ors vs. Quorum Consortium Ltd (2009) 3-4 S.C. 187.

For the 2nd appellant, the Court stated that in the circumstances, the only logical conclusion is that the Notice of Intention to Defend was filed on the date of judgment but after judgment was delivered. If the process had been filed before judgment, counsel would have applied for a stand down of the case rather than an adjournment. The Court however held that whether or not the Notice of Intention to Defend was filed before judgment was delivered, the fact remains that the process was not in the case file before judgment delivery and it was not brought to the attention of the Court that such a process had been filed. The High Court was therefore right to have entered judgment in favour of the respondent against the Appellants in the circumstances.

On issue 3, the Court stated the trite position of the law that to determine whether there is a cause of action against the 2nd appellant, the process to be considered by the Court is the writ of summons. The argument of Counsel to the appellants on this issue is that the 2nd appellant is not a proper party to the suit as he was merely a sub-lessor of the property and did not guarantee the loan. The Court upheld the contention of Counsel to the appellant and held that the 2nd appellant was misjoined to the suit, as from the record, he did not guarantee the loan neither was he a party to the tripartite agreement. The Court however stated the law that the misjoinder of the 2nd appellant will not affect the judgment as the judgment can be enforced against the proper party while the name of the misjoined party will be struck out.