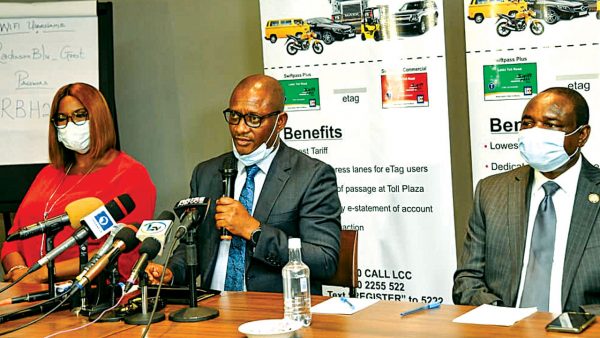 Lekki Concession Company Ltd (LCC) has debunked social media claim that Admiralty Circle Toll Plaza is a cash cow, stating that the bulk of the earnings is being used to repay loan incurred for the project from local and foreign lenders.

Managing Director of LCC, Yomi Omomuwasan, who gave the explanation, in a statement, said the youths had been misled to believe that all the LCC does is collect toll, which has instigated them to shut down the plaza with their protest.

Omomuwasan said the “total loan balance” incurred by LCC for the project from local lenders stood at N23.9 billion, while that of foreign lenders (AfDB) stood at $49.6 million as of December 31, 2011.

He explained that as of January 31, 2021, the outstanding debt liability from the local lenders was around N11.6 billion, and from foreign lenders, $31.1 million (USD), with the difference being the amount LCC has so far paid the lenders.

According to him, before the #EndSARS protest, LCC management had continued to meet up with servicing its loan obligations without default, but since the commencement of the protest, with the forceful takeover of the Admiralty Circle Toll Plaza and the “unfortunate incident of Tuesday 20th, October 2020”, LCC has had to plead for moratorium repeatedly with its local and international lenders.

Omomuwasan said that due to the takeover, it had been impossible for the LCC to meet its loan repayment obligations and take care of its workers, given the inability to collect toll, which is the main revenue source from which the repayment was contractually expected to come.

“While this explains where the bulk of the LCC earnings goes, the implication of default in payment of loans for the business community are too grave to be imagined.

“Sadly, our youths have also been misled to believe that all that the LCC does is collect tolls. This again is another falsehood being spread around on social media. Daily users of the Eti-Osa-Lekki-Epe Expressway would testify that LCC provides free 24/7 towing services, accident and breakdown recovery, emergency services and 24-hour security patrol along the express road.

“LCC is solely responsible for man-power and operational costs of all of these ancillary services at no cost to road users. No road, I repeat, no road in Nigeria today offers such. The Eti-Osa-Lekki-Epe Expressway is a world-class road infrastructure of reference in this jurisdiction. It is an example of what the government can achieve for the people by working with the organised private sector. Besides, many may have forgotten how narrow and choking the road was before this new one was built,” he explained.

On ownership of the LCC, Omomuwasan explained that some private sector shareholders originally owned it as at December 31, 2011. They are African Infrastructure Investment Fund (AIIF), Asset and Resources Management Company Ltd (ARM), Larue Projects Company Ltd and Hi-Tech Construction Ltd.

“To those still agitating that the Toll Plaza must never return, we believe we have set the records straight. There are loan obligations to be met. The road needs to be maintained. There are young Nigerians who earn a living from the Lekki Concession Company,” Omomuwasan added