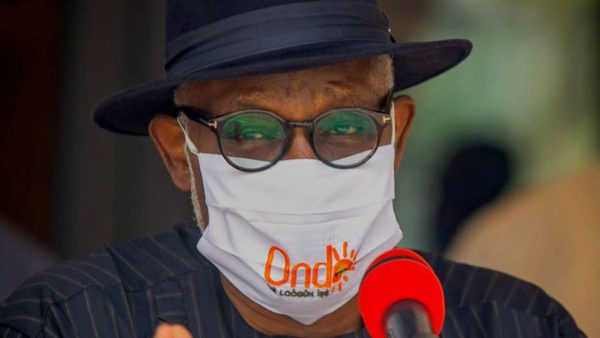 The Ondo State Attorney General and Commissioner for Justice, Sir Charles Titiloye, has directed immediate investigation into the allegation by one Olupelumi Fagboyegun that he has been on remand for 3 years at the instance of the Chief Judge of state, Hon. Justice O. O. Akeredolu.

This is contained in a statement made available to ASKLEGALPALACE signed by Adenike Akinbosade, a Personal Assistant to the AG titled, “RE:OLUPELUMI FAGBOYEGUN ALLEGATION AGAINST ONDO CHIEF JUDGE, ATTORNEY GENERAL OF ONDO STATE DIRECTS IMMEDIATE INVESTIGATION.

Akinbosade said, “The Attorney General of Ondo State and Commissioner for Justice, Sir Charles Titiloye has directed the Department of Public Prosecution to immediately investigate the allegation made against the Chief Judge of Ondo state, Hon. Justice O. O. Akeredolu by Mr Olupelumi Fagboyegun (her brother) in a video that went viral on social media platform on the 15th of February, 2021 wherein he alleged that Ondo state Judiciary and Courts were being used by the Chief Judge to persecute him and keep him in custody for the past 3 years on trumped up criminal allegation of unlawful entry into his father’s house.”

The statement assures that the investigation into the matter will be thorough, fair and transparent in order to assure the public that Gov. Oluwarotimi Akeredolu SAN administration in Ondo state is determined to preserve the integrity of the Courts and the Judiciary and ensure that it remain the last hope of the common man.

“The Hon. A.G. who assumed office on the 30th November 2020 (two months ago) said his office is yet to be briefed of the criminal case and have directed the Department of Public Prosecution in the Ministry of Justice to investigate the allegation contained in the online video clips and report back to him within 24 hours.” the statement further reads

ASKLEGALPALACE recalls that Hon. Justice Akeredolu has denied being behind the detention of Fagboyegun. According to her, what is happening is the handiwork of some persons who are using Mr. Olumikpelumi Fagboyegun against her family