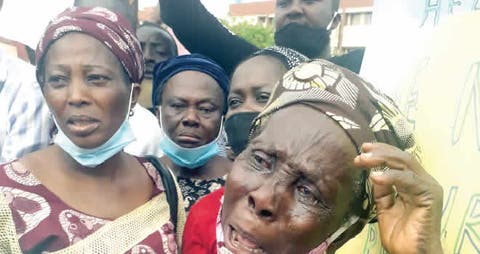 Many displaced landlords at Oke-Egan community, Kayetoro, Eleko, Ibeju-Lekki area of Lagos on Friday protested at the state House of Assembly against what they described as unlawful demolition of over 400 houses in the neighbourhood.

The protesters, who claimed to have bought the land from the community’s native families, explained that they were asleep around 3am on Monday when some government officials led by task force operatives brought down the buildings with bulldozers.

Amid sobs, they displayed placards with the inscriptions, ‘We have been demoralised, nowhere to go,’ ‘We want back our properties,’ ‘Our government has made its citizens helpless,’ ‘We want our land back,’ ‘We are low-income people made homeless,’ ‘Our children are crying,’ among others.

A landlord, who led the protesters, Mr Etim Odiase, said the residents had through their lawyer reported at the Office of the Surveyor General of the state last Friday when they learnt of the demolition plan, noting that they were shocked their houses were demolished without being served any notice.

He said, “Our lawyer was told that there was nothing like that. But around 3am on Monday, some officials in the company with task force policemen brought bulldozers and demolished about 400 houses. We were never told that the land had been acquired by the state government. Some of us from the community were told that the land was not under government acquisition.

“We want to know the reason the houses were demolished. We don’t know what is going on. We were never served any notice. Most of us are now on the streets and in hotels. We spent millions of naira on the houses; some of us have been living there for over 10 years. We just want to hear from the government the reason the houses were demolished. We want compensation from the government. We want the community back.”

Another affected landlord, Damilare James, said he made enquiries from the office of the Surveyor General about the land and he was told it had not been committed to any public use and could be regularised.

He alleged that they contributed N6m and gave the officials sent to them, adding that they were assured there was no problem.

He stated, “They rendered us homeless and destroyed our property worth billions of naira. We want Governor Babajide Sanwo-Olu to restore our land to us. We want the governor to give us Certificates of Occupancy over the land as a compensation for demolishing our houses, for putting us in emotional trauma and for putting our mothers in problem.

Pastor Abiodun Ajayi, whose house was also demolished, described the demolition as painful, saying that people, especially the elderly, were in hospitals as a result of shock.

He added, “My house was the first to be demolished and we couldn’t take anything away from it. They came with thugs and we could not talk. We have been coming here (Assembly). We wrote letters and the Oba Akiolu of Lagos also wrote a letter on our behalf.

“They didn’t need the land for any industry; they said it is meant for a housing scheme. It is painful that we are citizens, and voted for them yet we were treated like this. Over 400 houses were demolished.

“They should listen to us. With the #EndSARS protest and COVID-19, people lost their jobs. Now, a lot of people have been displaced.”

A widow and septuagenarian, Idowu Shitta, could not hold her tears as she narrated how the demolition had rendered her and her children homeless, adding that they had been passing the nights in the open.

She said, “There were four rooms in my house and they demolished everything. They have exposed me. At my age, I cannot work again. I live there with my children. I am a widow and I used to sell water. I want my land back. I have been sleeping outside since Tuesday. We were inside the rain yesterday (Thursday); we have nowhere to go.”

A mother of four, Bamidele Bolanle, said she and her husband laboured hard and took loans to put up a building which was also demolished.

She added, “We are still repaying the loan. They just came all of a sudden and destroyed it. We are now squatting in my brother-in-law’s house and our children can’t go to school.”

Another displaced resident, Eseoghene Ndikanwu, said her four-bedroom bungalow and boys’ quarter were destroyed, adding that the family members were unable to salvage any of their valuables.

She stated, “Our children are outside. We have nowhere to stay. They cannot go to school. Those people came around 3am. I was begging them but they didn’t listen to us.”

Addressing the protesters, the Speaker of the House, Mudashiru Obasa, represented by a member representing Ajeromi/Ifelodun Constituency I, Lukman Olumo, appealed for calm, adding that the House would address their grievances.

He said, “The House of Assembly is your House and you voted us to protect your interest and you can rest assured that your interest will be protected. Nobody in Lagos can treat the people of the state unlawfully on their property.

“You can have the best of assurances that this matter will be looked into critically by the House. I can assure you that very soon, you will get a favourable response. Let us be law-abiding; we should not take the law into our own hands.”