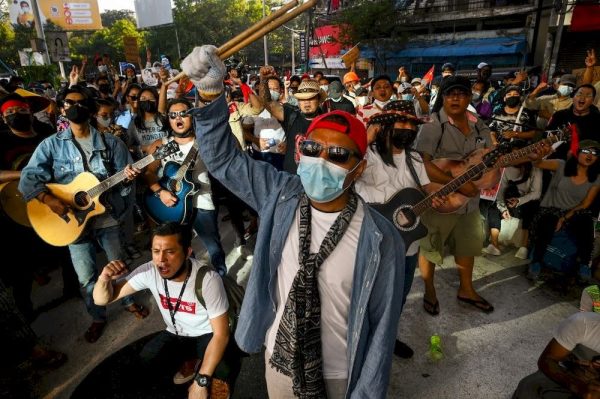 His warning comes after a sixth consecutive day of anti-coup rallies condemning the ouster of civilian leader Aung San Suu Kyi, and follows US President Joe Biden announcing sanctions against the generals on Wednesday.

While the demonstrations have largely been peaceful, security forces earlier this week used tear gas, water cannon and rubber bullets, with isolated reports of live rounds being fired.

“Due to unscrupulous persons’ incitement, some civil service personnel have failed to perform their duties,” he said in a statement.

“Effective actions will be taken.”

Since the February 1 coup, there has been an outpouring of anger and defiance, calling for the release of Suu Kyi and other detained senior figures of her National League for Democracy party.

Demonstrators again marched peacefully on Thursday in Naypyidaw — the capital and military stronghold — as well as Yangon, the largest city and commercial hub, which saw tens of thousands flood into the streets.

“Don’t go to the office,” chanted a group of protesters outside Myanmar’s central bank in Yangon, part of the effort urging people to boycott work and put pressure on the junta.

“We aren’t doing this for a week or a month — we are determined to do this until the end when (Suu Kyi) and President U Win Myint are released,” one protesting bank employee told AFP.

Joining the protest were dozens from the ethnic Karen, Rakhine and Kachin communities — drawn from Myanmar’s roughly 130 ethnic groups, some of who have faced intense persecution from the army.

“Our ethnic armed groups and ethnic people have to join together to fight against the military dictatorship,” Saw Z Net, an ethnic Karen protester, told AFP.

In Shan state demonstrators in traditional costumes took their anti-coup message to the water on Lake Inle, with similar scenes unfolding in the ancient UNESCO heritage city of Bagan as hundreds marched between temples and pagodas.

Western nations have repeatedly denounced the coup, with the United States leading calls for the generals to relinquish power.

In the most significant concrete action, Biden announced Wednesday that his administration was cutting off the generals’ access to $1 billion in funds in the United States.

“I again call on the Burmese military to immediately release democratic political leaders and activists,” Biden said, as he flagged further sanctions.

“The military must relinquish power.”

There were more reports of arrests Thursday, including the deputy speaker of the parliament’s lower house and a key aide to Suu Kyi, taking the number of coup-linked detentions to more than 200, according to monitor Assistance Association for Political Prisoners.

The NLD — whose Yangon headquarters saw a raid this week — also confirmed the arrest of the election officials in the afternoon.

It quickly moved to stack courts and political offices with loyalists as it ended a decade of civilian rule.

Fears are growing over how long the junta will tolerate the protests.

Live rounds were fired at a rally in Naypyidaw this week, critically wounding two people — including a woman who was shot in the head.

Images depicting the woman have been shared widely online alongside expressions of grief and fury.

Concern grew Thursday that the junta was planning to impose a much harsher and sustained internet crackdown.

Tech-focused Myanmar civil society organisation MIDO tweeted that a draft cybersecurity bill had been sent to telecom companies, which would allow the military to order blackouts and website bans.

Norway-based Telenor, which had complied last week to block social media platforms where an online anti-coup campaign was proliferating, said it was reviewing the law.