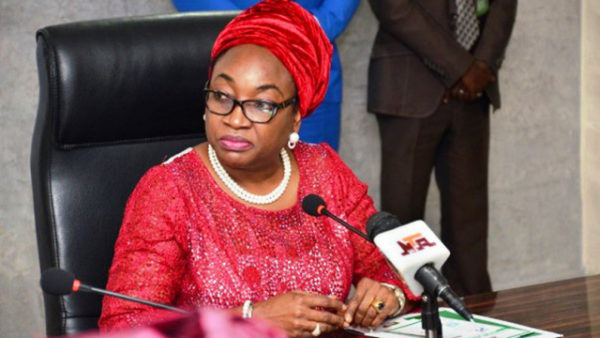 Justice Taiwo Taiwo of the Federal High Court, Abuja, on Thursday, threatened to return the case file of the former Head of Service (HoS), Mrs Winifred Oyo-Ita, to the Chiefs Judge, Justice John Tsoho, for reassignment.

Justice Taiwo’s remark followed the Economic and Financial Crimes Commission (EFCC)’s delay in withdrawing another suit filed before Justice Folashade Giwa-Ogunbanjo for the freezing of the bank accounts of three defendants in the trial of Oyo-Ita while the matter before him was still pending.

The EFCC had filed an exparte motion with suit number: FHC/ABJ/CS/1202/2020 before Justice Giwa-Ogunbanjo for the freezing of the bank accounts of 4th, 5th and 6th defendants in the alleged N570 million money laundering charge preferred against the ex-HoS and others before Justice Taiwo.

The News Agency of Nigeria (NAN) reports that while Oyo-Ita is the 1st defendant in the suit marked: FHC/ABJ/CR/60/2020 before Taiwo, Garba Umar, and his two companies; Slopes International Ltd and Good deal Investment Ltd are 4th, 5th and 6th defendants respectively.

The defence counsel had, on Dec. 1, 2020, complained that the anti-graft agency had frozen the bank accounts of their clients even when the matter was still pending before the court.

They urged Justice Taiwo to adjourn the trial sine die (indefinitely) until the EFCC placed before the court the evidence that it had unfrozen those accounts, describing the act as “an abuse of court process.”

At the resumed hearing on Thursday, Justice Taiwo said he went through his record and discovered that he delivered a ruling on Dec. 3, 2020, on the defence counsel’s prayer.

The judge said he had ordered that the EFCC’s lawyer, Mohammed Abubakar, should do the needful by providing reasons for the freezing order before Justice Giwa-Ogunbanjo and report back to him.

“On that day, I said in my closing remark that ruling and further hearing in this matter is adjourned to Jan. 13,” he said.

“I was looking through my record and I didn’t see those processes Mr Abubakar,” Taiwo asked Abubakar.

Responding, Abubakar said he had filed the processes as directed.

When the judge asked if the matter had come up again before Giwa-Ogunbanjo, the EFCC counsel said it had not.

Justice Taiwo then asked: “Why do you have to go to Ogunbanjo when the case is pending here?”

Abubakar explained further that the accounts were frozen pending the conclusion of the trial before Taiwo.

He said when the EFCC filed the exparte motion to obtain the freezing order, it was the chief judge of the court that assigned the case to Giwa-Ogunbanjo.

Abubakar said the two suits before Justice Inyang Ekwo with number: FHC/ABJ/CR/61/2020 in the trial of ex-Minister Tanimu Turaki and the one before Justice Taiwo were like siamese twins because they linked together.

He said the agency decided to split the suit because of the number of people involved and that the suit numbers were exhibited in the application filed before Justice Giwa-Ogunbanjo in order to be open and transparent in the trial.

The judge then said the most important thing for the lawyer to do was to withdraw suit before the other judge.

He said the application could be filed before him to consider the merit of the matter.

“That is what the law says,” he said.

He said the matter had already been discussed in one of the proceedings, urgent Abubakar to do the needful.

“Do the needful and withdrawal it, or else I will return the file to the CJ. I cannot discharge an order made by a sister court,” the judge said.

“We will see how we can withdraw it,” Abubakar said.

Justice Taiwo then adjourned the matter until Feb. 24 for ruling on the propriety of the EFCC’s application.

NAN observes that the anti-corruption agency had filed two separate suits involving Oyo-Ita and Turaki on Feb. 28, 2020, at the Federal High Court, Abuja.