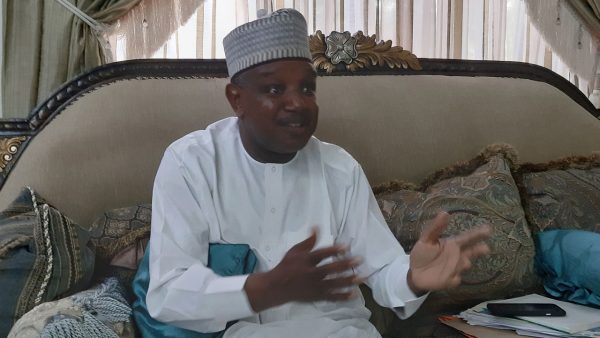 Gov. Atiku Bagudu of Kebbi State has flagged-off the construction of a Housing Estate of two-bedroom bungalows at Zauro for indigents and flood victims.

The News Agency of Nigeria (NAN) reports that the groundbreaking ceremony held at Zauro, outskirts of Birnin Kebbi, the state capital.

Bagudu, who was represented by the Chief of Staff, Government House, Alhaji Suleiman Argungu, said the houses would be allocated to low income earners.

According to him, the flood victims and indigent persons will enjoy 50 per cent discount.

Bagudu said the construction was part of the sustained efforts of his administration towards improving the living standard of people, especially ordinary citizens to enable them access decent accomodation in the state.

”On completion of the houses, priority will be given to victims of flooding who lost their shelters and other indigent persons at 50 per cent discount of the total cost,” he said.

The governor said that the developers were directed to ensure timely completion of the project as scheduled, adding that it must also be in accordance with specifications of quality standard.

Bagudu assured that basic amenities would be provided at the layout, including recreational facilities.

The governor expressed readiness of his administration to partner with relavant agencies, organisations and development partners to improve the socio-economic development of the state.

Earlier, the state Commissioner for Lands and Housing, Alhaji Mahmud Warah, said the ceremony marked the inception of other housing schemes to be implemented.

He restated the unwavering commitment of the state government to pursue, ensure and facilitate sustenance of commercial activities in the state.

The commissioner also explained that the state government had constructed modern markets in Ambursa, Jega and Argungu, adding that new stalls had been built at the new Birnin Kebbi market.

Mr Godflint Ike, the Managing Director of Ommi Frontier International Investment Ltd, said the programme, which started in 2017 as part of the International Goal Agenda for 2020 houses in Nigeria, was meant to address the shortage of housing in the society.

Ike said the project would be executed in other parts of the country, adding that Kebbi is the first to benefit from the North-West zone, comprising Zamfara, Sokoto, Kaduna, Katsina, Jigawa and Kebbi states.

According to him, 70 per cent of the houses have been reserved for internally displaced persons, while 25 per cent would be distributed among vulnerables, less privileged and civil servants at affordable costs.

The Financial Adviser to the project, Dr Lilian Iwu, expressed optimism the that Kebbi housing project would be one of the best in view of the strong commitment of the state government to the success of the programme.