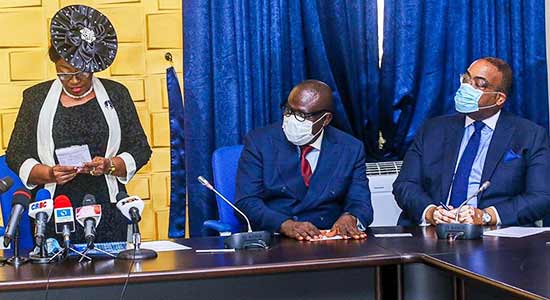 — Promises To Find Lasting Solution To Challenges Bedeviling The Magistrates

In a bid to resolve the numerous challenges that have bedeviled the Cross Rivers State Judiciary in recent months especially with regards to non-payment of Magistrates in the state, the challenges associated with the confirmation of the substantive Chief Judge of the State, Hon. Justice  Akom Ikpeme amongst others, The President of the Nigerian Bar Association, NBA, Olumide Akpata, together with some Bar leaders have held interactive sessions with some concerned persons in the state, including the Magistrates and the Governor of the state at separate discussions.

The NBA President updated the Magistrates of steps already taken by the NBA in a bid to resolve their present difficulty, whilst also seeking a more amicable resolution of the situation with the Governor on-behalf of the Magistrates who have been working without pay.

The details of the round table was made official via a publication by the Publicity Secretary of the NBA, Dr. Rapulu Nduka and made available to ASKLEGALPALACE, today.

As part of ongoing efforts by the leadership of the Nigerian Bar Association (“NBA”) to address the issues plaguing the Judiciary in Cross River State (CRS), the NBA President, Olumide Akpata, in the company of the NBA Welfare Secretary – Mr. Kunle Edun, had an interactive session on 7th February 2021 with the CRS Magistrates who have been working without pay for the past 2 Years.

At the engagement, the NBA President assured the Magistrates of the commitment of the NBA in finding a lasting solution to the existing imbroglio and informed them of the steps already being taken by the NBA in that respect.

On a related note, following the resolution of the constitutional crisis in CRS Judiciary, the President, on the 8th day of February 2021, took part in the swearing-in ceremony of the substantive Chief Judge of the State – Hon. Justice Akon Ikpeme. At the ceremony, the NBA President reiterated the commitment of the NBA to ensuring that the rule of law is always upheld in line with the motto of the Association.

Subsequently, the President met with the Governor of CRS – Prof. Ben Ayade, to discuss the issues surrounding the non-payment of the Magistrates and other issues affecting the Judiciary and the adminstration of justice in the State, with a view to resolving them.

The NBA President was accompanied by the Welfare Secretary – Mr. Kunle Edun and Chairmen of Branches in Cross River State.

Please be assured that as the various issues are resolved, members of the Association will be duly kept up-to-date.