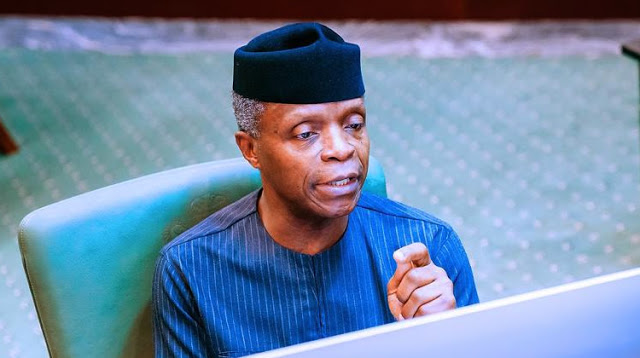 Vice President Yemi Osinbajo on Tuesday said Nigeria must remain a united country because “we are stronger together than apart.”

He said the cries of justice, fairness and equity by communities must be attended to within the same union.

According to a statement by his Senior Special Assistant on Media and Publicity, Laolu Akande, the Vice President spoke in his hometown, Ikenne, Ogun State, where he revalidated his membership of the ruling All Progressives Congress.

The statement was titled “We must and we will attend to cries of communities for justice -Osinbajo.”

Osinbajo spoke at a time there are increasing agitations from ethnic groups for the break-up of the country.

But the Vice President said Nigerians must resist such attempts to destroy the country’s unity.

“We must resist any attempt to destroy the unity of this country. Our people have lived and worked together for decades, even centuries.

“While we must attend to the cries of communities, and the cries of our people for justice, equity and fairness, we can do so within this same union. Ultimately we are stronger together than apart,” the statement quoted Osinbajo as saying.

On the security challenges being witnessed across the country, Osinbajo said the present regime was placing emphasis on technology for surveillance and intelligence gathering.

He expressed the hope that the recent appointment of new service chiefs will lead to fresh strategies to tackle insurgency in the North East as well as banditry and kidnapping in other parts of the country.