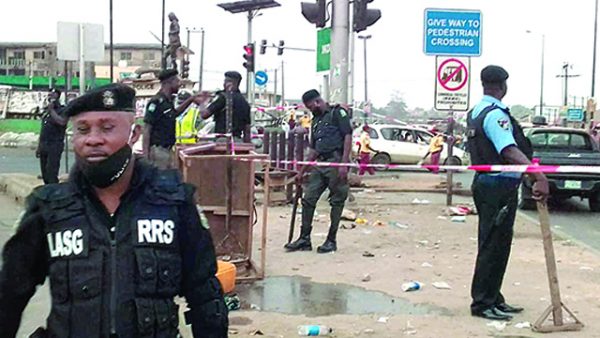 The Lagos State Police Command, at the weekend, arrested 27 suspects in a planned raid of different criminals’ hideouts in the metropolis.

The arrest was carried out by the operatives of the RRS as a follow-up to the directive of the Commissioner of Police to the commander, Rapid Response Squad (RRS), CSP Olayinka Egbeyemi, to place certain spots under surveillance and dislodge criminals hibernating in the areas, especially at Ikeja, Agege and Alimosho areas of Lagos State.

The state Commissioner of Police, Hakeem Odumosu, said the command would continue to intensify efforts to reduce traffic robberies, cult activities and other social vices within the state to their barest minimum.

While commending the RRS operatives for the successful operations, Odumosu advised parents and guardians to monitor their children and wards on the company they keep, as cultism and traffic robberies remain unpardonable crimes, as they attract stringent punishments.

Meanwhile, in furtherance of the promises of Odumosu, at the recently concluded Ikorodu town hall meeting held on Wednesday, January 27, 2021, that Ikorodu would be rid of illegal and criminal acts, spokesman for the police in Lagos, Muyiwa Adejobi, told newsmen that the police special squad hit the town on Thursday, February 4, 2021, around 6.00 p.m. on sting operations.

The operations were carried out simultaneously to remove the shanties, blockages and open markets on the roads in Ikorodu Division, particularly at the Agric Area and some other parts of the town, that had been an eyesore and criminal hideout, with a view to making the town free of gridlocks and crimes.

The squad succeeded in clearing the blockages on the roads, illegal parks and shops.