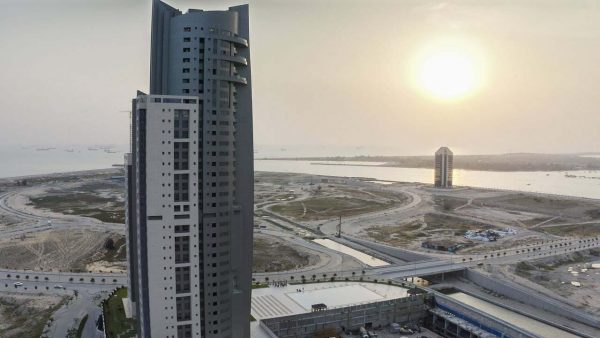 Faced with the challenge of over 20 million people inhabiting a landmass of about 1,171.28 square kilometres, land reclamation has become a norm in Lagos to mitigate its pressing need for housing.

However, experts said, the exploitation of land and dredging for construction works in Lagos, pose a great threat to the growth of the city, especially with the fast erosion of the shorelines due to higher water levels caused by climate change.

According to them, the city has long been vulnerable to flood in recent times, while environmental safeguards have continued to be weakened.

Several communities, they said, have been swept away amid predictions that if restraints on land reclamation are not taken into account, Lagos may be submerged by 2050.

Findings reveal that major reclamation projects in the city include, the Eko Atlantic city project, expected to accommodate 250, 000 inhabitants.

The project descriptions include shoreline protection and reclamation activities of over 1, 000 hectare of land and construction of a mixed-use development in the city.

Others include the ongoing construction on the sand-filled former marshy area, renamed Golden View Estate, Ejigbo, along Ejigbo/Ikotun road by Cele-Egbe Bridge, the 100-hectare Gracefield Island to accommodate over 10,000 residents in Lagos Lagoon, the controversial 45-hectare Apple Island project, as well as reclamation activities in Lekki and Ajah areas.

Industry experts are also concerned with the level of compliance with existing Environmental Impact Assessment (EIA) Act No. 86 of 1992, which guides such projects.

The provisions of the EIA Act No. 86 of 1992 govern the EIA process in Nigeria. The law confers the mandate to implement it on the Federal Ministry of Environment (FMEnv) in accordance with this law.

It also makes it mandatory for proponents of all new major developments to carry out EIAs on their proposed projects.

Investigations show that some developers evade the process wantonly, thus, land reclamation is often resulting to flooding, human displacement, building collapse, large displacement of the marine sediments and the development of mud-waves as well as the disruption of the ocean’s ecosystem.

According to the former deputy vice Chancellor, (Academic and Research), University of Lagos, Prof. Babajide Alo, land reclamation without due Environmental Impact Assessment (EIA) could lead to serious environmental degradation.

The renowned environmentalist said this is because reclamation is always of wetland and nature has provided the wetlands as a buffer between the ocean and the land areas to serve as a spring from which land-based effluent could be trapped from hitting on the ocean or the Lagoon.

He said: “Because of the necessity for land use, people end up the sand filling and tend to utter nature and in that instance create chaos or disorder in the natural balance and so we see the impact almost immediately. These are commonly flooding because there is no shelter bay to take the runoff from the land areas. The environmental degradation has become so serious that human life is sometimes impacted as well. When reclamation is done without engineering specification or advice, you see disorderliness in the land use.”

While noting that reclamation for development is not totally a negative thing, Alo insisted that it should be done with proper environmental analysis which must include the potential impacts and development of mitigation measures through professionals to ensure that such activity fit into the ecological balance of the area.

Also the Project Director, Arctic Infrastructure (AI), Mr. Lookman Oshodi, observed that in a city like Lagos where the per square kilometre of land available to a resident is relatively small, physical development is in spread form and cohesive approach to organise the city is not adequate, leading to competition over space which gives the outlook of the winner takes all.

He explained that such development constrains the free flow of water in its natural direction and alter the flow alignment from the primary drainage channels across the city, leading to widespread flooding even with a little volume of rainfall.

Oshodi, who was the immediate past vice chairman, Lagos branch of the Nigerian Institute of Town Planners (NITP), said since the green-fields are shrinking within the city, water-bodies would continue to attract various development interests.

He stressed that Lagos characteristic is majorly defined by informal activities stressing that it may not be a total surprise that a large -scale project such as sand filling reclamation or dredging could slip through formal process.

According to him, the ideal way is for the Ministries of Waterfront Infrastructure Development and Physical Planning and Urban Development to lead a Lagos Lagoon Management Plan, a 30-year master plan that will detail the usage, preservation and envision what Lagos Lagoon will look like in the next three decades.

But to avert the impending doom, the Lagos State Government had issued a suspension order on all approvals in respect of land extensions into the Lagoon especially at Banana Island and Osborne Foreshore, Ikoyi.

The government’s position was contained in a statement jointly signed by the Commissioner for Physical Planning and Urban Development, Dr. Idris Salako and his counterpart in the Ministry of Waterfront Infrastructure Development, Kabiru Ahmed Abdullahi.

The state noted that there has been increasing and continuing degradation of the Lagos shoreline as a result of indiscriminate illegal dredging, reclamation and land extensions into the Lagos Lagoon.

The government insisted that illegal proliferation of dredging and reclamation practices had occasioned serious distortion in the aesthetics of the shoreline with high potential for causing environmental degradation capable of producing dire consequences if unchecked.

“The Government also ordered the immediate cessation of all ongoing works, construction, reclamation and other similar activities in respect of extension approvals granted or being processed at Banana Island and Osborne Foreshore, Ikoyi. Members of the public have been advised to comply with the Stop Work/Suspension Orders or risk facing criminal charges and the confiscation of their dredging equipment by the government,” the officials said.

On the Ejigbo development, Dr. Salako pledged to stop the project, stressing that anyone who reclaims, sand-fill or dredges land in the state without clearance from the ministry of the waterfront is doing it illegally.