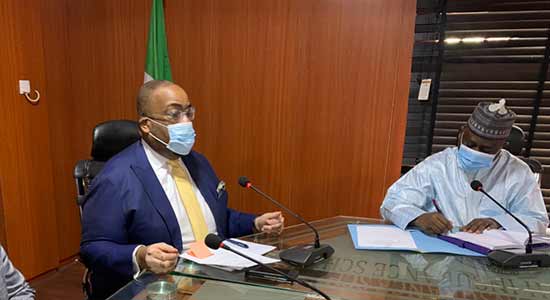 Legal practitioners across the country will soon have unhindered access to medical attention going by the planned collaboration between the National Health Insurance Scheme (NHIS) and the Nigerian Bar Association (NBA).

This was the outcome of a courtesy visit by the President of the Nigerian Bar Association (NBA), Mr. Olumide Apata to the Executive Secretary of the Scheme, Prof. Mohammed Sambo, in Abuja.

According to a statement by the Head of Media and Public Relations Division, Emmanuel Ononokpono, the professional body and NHIS agreed to work out details that will lead to lawyers receiving healthcare coverage under the Scheme.

Mr. Apata who led a three-person delegation to the corporate headquarters of the health financing agency expressed the confidence that the partnership between both organisations was bound to yield better quality of life for members of the association, noting that health insurance remained the best option for avoiding paying out-of-pocket for healthcare.

According to him, although the NBA already had life insurance policy whereby relations received specified sums of money at the death of members, there was the need for health insurance to ensure good quality of life for members of the association.

According to him, “If I did not have medical insurance, I would have paid so much for my healthcare when I was in dire need.”

Speaking against the backdrop of the significance of numbers as a factor for coverage of groups, he stated that the association has about 100,000 members nationwide which he considered significant to warrant healthcare coverage.

In his response, Sambo underscored the imperatives of working together, adding that partnership with the association held prospects of going beyond enrolment of lawyers to members of the association serving as opinion moulders for the scheme.

Highlighting the Scheme’s commitment to cover every Nigerian, the health insurance boss expressed optimism that steps taken by the NBA will inspire other professional bodies to consider similar initiatives.

He further observed that the e-NHIS platform recently approved by the Federal Executive Council (FEC) will put the Scheme’s business processes on the cutting edge of technology when it comes on stream, adding that the scheme was in cooperation with international partners to build capacity of staff of the Scheme.

To speed up the process of achieving the stated objectives of the collaboration, the Scheme has raised a committee to liaise with the legal body.