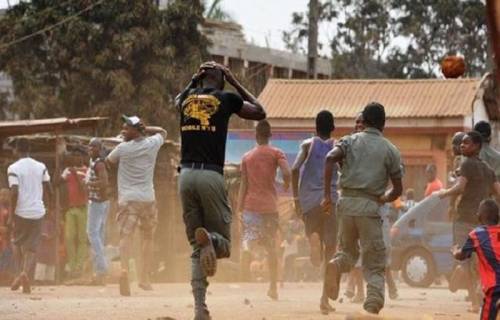 Leaders of Ikwuano Council communities in Abia State, who share boundaries with communities in Ini and Obot Akara Council of Akwa Ibom State, yesterday, sent a save our soul (SOS) message to their state (Abia) governor, Okezie Ikpeazu, on the recurring attacks orchestrated by their Akwa Ibom State neighbours lamenting that between May 2020 and January 2021, not less than 16 of their people have been killed.

The Ikwuano leaders, under the aegis of Ariam Usaka Development Union, addressed a press conference at Umuahia, the state capital, and described the attacks on their communities as unprovoked.

They told the governor in their letter, titled: “Deliberate Land Trespass and Unprovoked Killings of Ariam/ Usaka People” that the issue of unprovoked attack and the calculated moves to grab their lands across the border of Ikwuano (Ndiorie, Ariam Elu Elu, Obugwu Ekwelu, Oboni-Upa, Usaka-Ukwu, Ekpiri Ala-Ala and Aunuchai) by Ini and Obot Akara Council people has now intensified to the point where they (their neighbours) want to push them out of the land, which their ancestors magnanimously allowed them to occupy freely.”

In attendance at the conference were the President- General, Chief Boniface Mgbaramuko; the Secretary General, Barrister Sunday Ikpeka; the Public Relations Officer, Mr. Emmanuel Ekomanna; two traditional rulers, Eze Joseph Obaji and Eze Ambrose Nwagwu, who are Chairman and Secretary of Ariam/Usaka Council of Traditional Rulers. Others were Deacon Obioma Igwe and Mr. Pius Ezekwe who are President-General of Ekpiri Autonomous Community and Regent of Usaka Ukwu Autonomous Community.

They condemned the alleged killings of their Azunchai and Usaka-Ukwu indigenes by their said Akwa Ibom State neighbours over their legitimate and inherited farm lands, stating, “the most annoying aspect of this greedy expansionist objective of the Akwa Ibomites is the criminal reference and surveying of the Nigerian Army Camp sited at the farm lands of the Obugwu people of Ikwuano.

“The particular spot was approved by the regime when Lt. General Ihejirika was the Chief of Army Staff and properly designed to be built at farm lands of Abia territories.”

The union further told the governor that by their SOS letter, they were urging him to intervene and reverse the above wrongs meted out to their communities, interface with the National Boundary Commission to properly delineate the original boundaries across these areas of tension, seek for the establishment of military/Police posts at all strategic spots along the borders and demand for compensation from the Akwa Ibom State Government for the families of Ikwuano people killed from May 2020 to January 2021 whose names they made available to journalists.

While Ikwuano people allege being attacked by their neighbors, some unconfirmed reports credited to the accused Akwa Ibomites stated that the Ikwuanos also attacked them.

This suggests that both sides did at one time of another lost lives and properties of their people to the attacks.

Sequel to the reported recent attack on the Ikwuano community on January 22, 2021, the state Deputy Governor, Dr. Ude Oko Chukwu, who is also the chairman of the state Boundary Commission re-affirmed the government assertion and commitment to protect every inch of Abia land from being ceded to or annexed by any group or other States in whatever guise.

He spoke when he led state government delegation to the Usaka-Ukwu and Azunchia Ariam communities following the recent January 2021 attacks on them allegedly by their Akwa Ibom state neighbours, which attack reportedly resulted to loss of lives and property.

The deputy governor re-stated that Abia government, would not allow her lands to be taken over by anybody or group that want to expand their territories at all cost.

He described the renewed intermittent attack and unleashing of mayhem on innocent citizens and communities along the boundary corridors between Abia and Akwa Ibom States as condemnable and regrettable recalling that he had since the last report of violence, in liaison with his Akwa Ibom State counterpart, held series of meetings with the National Boundary Commission.

Adding that he would continue to mount pressure on the commission until the final delineation and demarcation of their boundary lines are concluded, he reminded the people of Azunchia Ariam and Usaka- Ukwu communities that government was aware of their predicament including the killing of their people but still enjoined them to remain law abiding and maintain peace assuring that government would always ensure that their lives and property are protected.

The Deputy Governor also visited the ‘A COY’ 145 Batallion of the Nigerian Army who man the boundary between Abia and Akwa Ibom states and charged the soldiers to always do the needful to prevent attacks and killings.

Speaking during the deputy Governor’s visit, the Chairman of Ikwuano Council, Chief Steve Mpamugo, lamented that their neighbours with whom they had shared boundaries peacefully over the years have turned around to attack and kill his people over lands that belonged to them (Ikwuano) over the years, in spite of their (Ikwuano) peaceful and accommodating disposition.

According to an Azunchai Ariam elder, Mr. Emma Ugbaja, and a youth leader from Usaka-Ukwu, Mr. Chikezie Chibuike, who commented separately, said “we now live infear of our neighbors who always lay ambush and kill our people in their farms, we urge the government to protect us from the incessant killings of our people and destruction of our property.”