NPF regulation, gender inclusiveness and the constitution
Editor
February 2, 2021
5:00 am 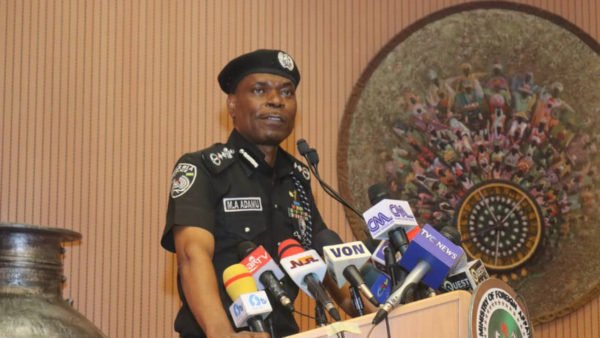 Last week, there were reports that a policewoman in Ekiti State, Constable Olajide Omolola has been sacked for getting pregnant out of wedlock. Such an act is said to be a violation of the extant law of the Force, to which she subscribed to, a year ago when she joined the service.

The signal for her sack originated from the Department of Finance and Administration in Ado Ekiti and was addressed to the Divisional Police Officer at Iye Ekiti, where Omolola was based.

The chief financial officer in Ekiti was asked to relay the information to the Integrated Personnel and Payroll Information System (IPPIS) to ensure that her salary was stopped. The document reads: “Section 127 of the Police Act and Regulation against women police getting pregnant before marriage; W/PC (woman corporal) Olajide Omolola passed out of Police Training School on April 24, 2020, attached to yours, contravened above provisions.

“She stands dismissed from the Force. De-kit her. Retrieve police documents in her possession with immediate effect. O/C CFO Ekiti only. You are to relay a signal to IPPIS Abuja for the stoppage of her salary with immediate EFFECT. DECOMPOLS (Deputy Commissioners of Police)/ACPOLS (Assistant Commissioners of Police)/HODs/DPOs Ekiti State only. You are to lecture women police. Treat as very urgent.”

The information hit Nigerians like a thunderbolt. They immediately reacted and condemned the action. But the Ekiti State Police Commissioner, Mr. Babatunde Mobayo defended the dismissal of Constable Omolola, who was attached to the Iye Ekiti Police Station in Ilejemeje area of Ekiti State.

Mobayo stated that the rule and regulation were unambiguous that woman police must undergo post-training experience on the field for at least two years before marriage and three years before childbearing.

Mobayo said: “In police organisation, we have rules and regulations, which are being carried out within the ambit of the constitution. Police officers are not even allowed to keep their children that are above 18 years of age in the barracks. Some of these laws were taught in the police colleges before we graduated.

“The lady in question passed out in May 2020, which is eight months ago and now she is six months pregnant. The Police Act 2020, which is undergoing amendment in the Senate, has not repealed that. She has contravened Section 127 of the police regulation.

According to him, the feeling that her fundamental human rights have been trampled upon is not true. The regulation, he said, is still in place. Contrary to the widespread belief that the regulation has been expunged, Mobayo maintained the Police Amendment Bill 2019, which was sponsored by Senator Uzenwa Onyebuchi on the Senate floor has not been passed, having only got to the second reading.

“The amendment being sought has not been done neither has the bill become law. It has just been referred to the Senate Committee on Police Affairs for further scrutiny. Aside from the foregoing, the amended Police Act is different from police regulation,” Mobayo clarified.

Speaking further, the Police Commissioner said he had been a commandant in one of the police colleges before becoming a CP, saying he handled several cases similar where the victims were dismissed, having flouted the law, adding that this could not have been treated as an exemption.

“I felt for that lady, though I never saw her before. We saw the medical report and we did due diligence on her case. We can’t shy away from the oath of office we took, but the IGP can still reverse whatever we do.

“About 300 policewomen graduated here last year. How would the public feel if they see all of them pregnant in less than a year? It will look ridiculous. We are not the drafters of the rules, we met them there. All these disciplinary actions are what made us able to control our men. No Police constable is underage, they should know what to do not to get pregnant within the time prohibited by regulation,” he stated.

But all these explanations are still not going down well with many Nigerians, who are asking whether the same applies to policemen who impregnates women out of wedlock? The Nigerian Bar Association (NBA) welfare Secretary, Kunle Edu announced on Friday that the NBA through its Public Interest Litigation Committee is following up on the case. He didn’t provide further information despite the prodding.

However, the Women Empowerment and Legal Aid (WELA) said the treatment is discriminatory. In a statement endorsed by its promoter, Funmi Falana, the group called for her reinstatement and threatened to sue the Police at the National Industrial Court over the matter, if she was not reinstated.

According to WELA, since the views expressed by Mr. Abutu represent the official position of the Nigeria Police Force, it is pertinent to refer the Police Authorities to the case of Women Empowerment and Legal Aid v. Attorney-General of the Federation (2015) 1 NHRLR 39 at 57 where the Federal High Court Per Adah J. (as he then was) held as follows: “The most fundamental issue is if this is the policy laid down for the police, does it apply to the men folk? It is not. So it is only issued to women police officers because of their gender as women and this is very much unconstitutional.”

Under Section 5(3) of the Police Act 2020, the Nigeria Police Force, WELA said, is charged with the responsibility of promoting and protecting the fundamental rights of all persons as guaranteed under the African Charter on Human and Peoples’ Rights (Ratification and Enforcement) Act (Cap A9) Laws of the Federation of Nigeria, 2004.

“In view of the foregoing, you will agree with us that Section 127 of the Police Regulation which discriminates against policewomen is illegal and unconstitutional. In other words, since policemen who impregnate women before marriage are allowed to remain in the Police, it is discriminatory and unjust to dismiss a policewoman for getting pregnant before marriage.

“Finally, as it is indisputable that Omolola is entitled to freedom from discrimination guaranteed by Section 42 of the Constitution and Article 2 of the African Charter on Human and Peoples’ Rights, we request you to use your good offices to order her reinstatement not later than January 31, 2021.

“Take notice that if our request is not granted, we shall challenge the dismissal at the National Industrial Court and pray for the annulment of Regulation 127 made pursuant to the Police Act, 2020,” the group threatened.

Also reacting, the Chairman, NBA Young Lawyers Forum, Ikeja Branch, Yusuf Nurudeen, stated that the dismissal of Omolola is outright discrimination against her person on the basis of her gender, which is against acceptable standards in a democratic setting like Nigeria. The act, he said, is against the spirit and letters of the 1999 Constitution of Nigeria, in Section 42(1), which in its opening paragraph states that “a citizen of Nigeria of a particular community, ethnic group, and place of origin, sex, religion, or political opinion shall not, by reason only that he is such a person be discriminated against …”

His words: “Paragraph (a) further states inter alia that such citizen mentioned in Subsection (1) must not be “subjected either expressly by, or in the practical application of any law in force in Nigeria or any executive or administrative action of the government to disabilities or restrictions to which citizens of Nigeria of other communities, ethnic groups, places of origin, sex, religions, or political opinion are not made subject to.

He argued that the Nigeria Police (Repeal and Reenactment) Act, 2020, was enacted to cure the defects in the former Police Act, which is replete with provisions relating to the colonial era. Of particular reference, he said, is the provisions in sections 120 to 128, which made special provisions for women in the force from the form of duties that they may undertake, may under permission get married as well as pregnancy of unmarried Policewomen.

“In that law, section 121 provided that women police officers shall as a general rule be employed on duties which are connected with women and children, and shall be particularly employed in the following duties- (a) investigation of sexual offences against women and children; (b) recording of statements from female witnesses and female accused persons and from children; (c) attendance when women or children are being interviewed by male police officers; (d) the searching, escorting and guarding of women prisoners in police stations, and the escorting of women prisoners to or from police stations; (e) school crossing duties; to mention a few.

“While section 122 reduced the women in Police to clerical duties, telephone duties and office orderly duties, the present-day reality had shown that women have more capacity and sterling achievement have been recorded from their commitment to service. It is the same law in Section 124 that made it mandatory for women to get the Commissioner’s permission before they can marry the man of their choice and dismissal for pregnant unmarried Policewomen in section 127. But I am aware that the Federal High Court sitting in Lagos has declared the provisions of Section 124 as illegal, null and void due to its inconsistency with Section 42 of the 1999 Constitution,” Nurudeen said.

He, therefore, insisted that the decision of the Commissioner of Police in Ekiti premised on the old law, that is, Section 124 of the Nigeria Police Act Cap C19, Laws of the Federation of Nigeria 2004 is ill-fated and unfortunate. According to him, it runs contrary to the provisions of Section 36(8) of the 1999 Constitution of Nigeria and should be challenged before a Court of competent jurisdiction. “As a matter of fact, it is not in the place of an employer including the Federal Government to determine the lifestyle of their employees,” he summed up.

However, the Chairman of the Civil Liberties Organisation (CLO), Lagos, Comrade Kenny Abiola Bakare, said sacking the lady is not something Nigerians should drag too much. The action, he stated, is a matter of the police rule of engagement in respect of policewomen. “It is clearly written in the police act cap p19:(125) (127):2006, which has been amended recently that no special privileges are accorded to married policewomen. Also, unmarried woman police who becomes pregnant shall be discharged from the force and shall not be re-enlisted except with the approval of the IGP. This woman constable had gone against the rule,” he declared.

According to him, being a new police officer who has not served long made everything very clumsy. However, Bakare said the only option available to the lady is to plead for pardon. “We will continue to lead to the IGP to extend a good gesture to her for pardon,” he suggested.