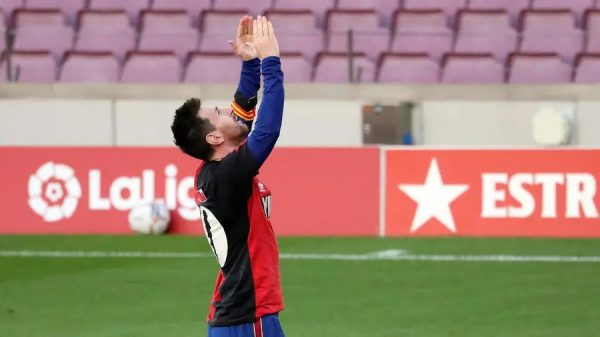 Barcelona will take legal action against the Spanish newspaper El Mundo after it published details on Sunday of Lionel Messi’s current contract, which it says is worth up to 555 million euros ($674 million) over four years.

Barca responded by also insisting they were not responsible for the leak, although the club did not deny the details of the report.

El Mundo say the deal signed by Messi in 2017 is the “largest in the history of sport” and called it the “colossal contract that ruins Barcelona”.

With six months left of the deal to run, “the player has already earned 511,290,052 euros, almost 92 per cent of the possible total”, the report claims.

The leak comes as Barcelona are wrestling with a dire financial situation, worsened by the pandemic, and with Messi’s future still up in the air, given the striker can leave the club for free this summer.

“In view of the information published today in the newspaper El Mundo, in relation to the professional contract signed between FC Barcelona and the player Lionel Messi, the club regrets its publication given that it is a private document governed by the principle of confidentiality between the parties,” said Barcelona in a statement.

– ‘Absolute support’ -“FC Barcelona categorically denies any responsibility for the publication of this document, and will take appropriate legal action against the newspaper El Mundo, for any damage that may be caused as a result of this publication.

“FC Barcelona expresses its absolute support for Lionel Messi, especially in the face of any attempt to discredit his image, and to damage his relationship with the club where he has worked to become the best player in the world and in football history.”

According to the report, Messi earned 115 million euros just for signing the contract in 2017 and among his potential bonuses is a 3,548,644-euro reward for winning the Champions League and 2,365,766 euros for winning La Liga, El Mundo claims.

His club contract dwarfs those of the other top earners in global sport.

Patrick Mahomes, the Kansas City Chiefs quarterback, last year signed the biggest contract in North American sport, worth a minimum of 450 million dollars, but it is 10 years long.

Cristiano Ronaldo’s contract with Juventus is worth a reported 30 million euros a year, but bonuses may have taken it up to 70 million euros last season. Ronaldo also earns more from endorsements than Messi.

Messi is set to decide in the coming months whether he wants to stay at Barcelona or leave the club he joined as a 13-year-old and where he has become arguably the greatest player of all time.

Frustrated with Barca’s decline in recent years, the Argentinian also feels unfairly blamed for worsening performances on the pitch.

Manchester City and Paris Saint-Germain are the favourites to sign Messi if he chooses to leave.