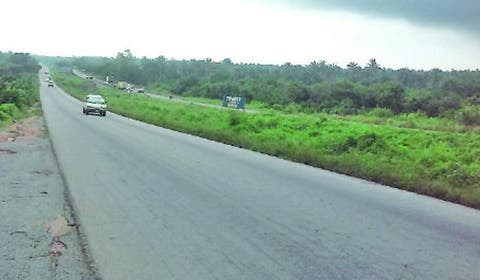 Nigerians are well aware of the fact that the Ijebu Ode-Epe Expressway was one of the most prominent roads during the defunct Western Region. But with wear and tear and the governmental neglect that they have sadly come to accept as a reality of life, it became a nightmare to users over the years. Happily, however, the pragmatic intervention by the Ogun State government has changed the narrative, and it is a fact that it now serves effectively as a supporting road to the ever-busy Lagos/Ibadan Expressway.

When, last year, the Ogun State governor, Dapo Abiodun, commissioned the construction of the 14-kilometer Ijebu-Ode-Epe road, it was with a view to easing the agonies of motorists, increasing the urbanisation map of the state and opening up the state for investment. The road, which lies at the border areas and connects Ogun to Lagos, Nigeria’s economic capital, was awarded to Craneburg Construction in a public-private partnership arrangement under the Build, Use and Transfer framework. Its features are a marvel: a dual-carriageway with 10 lanes, four lanes on each side with one pull-out section, and a 14-lane toll plaza for easy toll payment. The road furniture and beautiful landscape are a great sight to behold.

When the reconstruction was launched last year, analysts pointed out that travellers heading to Ikorodu, Epe, Lekki and adjoining areas from Ogun State would have a viable alternative, and that the reconstruction would open up the areas that it stretches through for investment opportunities. Indeed, during the commissioning, Abiodun observed that the road meant to connect Ijebu-Ode to Epe, Ajah and Victoria Island in Lagos State would provide a perfect alternative to the always-locked-down Lagos-Ibadan Expressway with its annoyingly ceaseless gridlocks. The promise has been kept, as the road is now at 65 per cent completion stage. Already, motorists intent on circumventing the hassles of the Lagos-Ibadan road are taking advantage of the road. It has become a viable alternative for motorists coming to Ogun State from Lagos, and for commercial drivers loading up their vehicles at Lekki and Ajah and heading to the East or the North. Beauty has no other name: beauty is what it is.

It must be music to the ears of the great people of Ogun State that, as experts have confirmed, the Ijebu-Ode-Itamapako-Epe road has reached 65 per cent completion stage. Speaking during an interaction with journalists, the Project Manager, Craneburg Construction, Amine Tawk, disclosed that barring any unforeseen circumstances, the road would soon be completed, with no less than 30 communities reaping economic benefits. This aligns perfectly with Abiodun’s pledge, during an inspection tour of roads across the state, that the 14.7km road would be inaugurated in the second half of this year. The timeline, in fact, is May. As noted by the Commissioner for Works and Infrastructure, Ade Akinsanya, infrastructure development is a major agenda of the state government. No doubt, the Abiodun administration desire to stimulate economic activities, create a safe environment where investment thrives, and increase the Ogun peoples quality of life is in ample evidence with the pace of work on the road despite the limitations imposed by COVID-19 on the economy. Although not yet completed, the Ijebu Ode-Epe road is fast opening up access to different communities along the corridor and reducing the burden of vehicle maintenance.

And residents along the axis are giving the government kudos. A resident along the axis identified as Abigael Imoleayo, commended what she called the governor’s talk-and-do approach to governance, noting that the rehabilitation and reconstructing a strategic road linking Ogun State to Lagos, an architectural marvel, was already upping the ante of business and development in the host communities. Imoleayo’s views are echoed by Olufemi Otukoya, a resident along the Ijebu-Ode-Epe road, who stated that the administration had shown its commitment to the “convenience and economic prosperity of the people. And while a community leader along the axis, Chief Kolade Onanuga, said that the gesture had greatly improved economic activities in the area, a commercial driver plying the eastern part of the country from Lagos, Emeka Nnandi, said that the road was already reducing the traffic bottlenecks and loss of man-hours hitherto experienced by travellers within Lagos and Ogun State corridors.

The 14.7 Ijebu-Ode-Epe road no doubt offers an alternative route to Ijebu-Ode-Sagamu-Lagos expressway thus making business activities a worthwhile venture without stress. Many industries have moved to sites along the corridor, an easy route for motorists going to Lekki and Lagos Island. Many motorists are already testifying to the fact that it has saved them from the perennial traffic along the Lagos-Ibadan corridor.

The Lagos/Ibadan road, Nigeria’s busiest road, is currently undergoing reconstruction. That means much pain for millions of Nigerians. Governor Abiodun’s latest project is particularly strategic: it is not only easing the burden on the Lagos/Ibadan road but also fast-tracking movement and economic transactions between the two contiguous states. What is more, if the current state of the road is any indication, the contractor is poised to deliver on the project as agreed. As noted previously, since the road will be tolled when completed, the issue of rehabilitation and repair should pose no serious challenge, especially given the fact that this is a public-private arrangement with inbuilt mechanisms for sustainability.

Despite COVID-19 and all the negativity it offers and attracts, including the paucity of funds, the governor has been able to apply scarce resources for the development of the state and the happiness of its people.