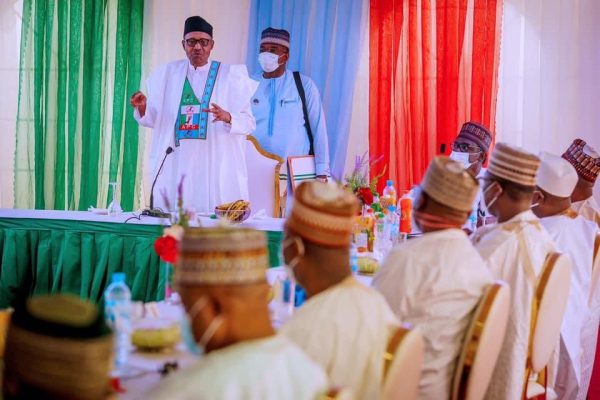 Director-General of Voice of Nigeria (VON), Mr Osita Okechukwu, has hailed President Muhammadu Buhari for promoting the doctrine of internal democracy in the ruling party, the All Progressives Congress (APC).

Okechukwu, who gave the commendation in a statement on Sunday in Enugu, saluted President Buhari for flagging-off of the APC’s nationwide Membership Revalidation exercise at Daura, Katsina State, on Saturday.

The News Agency of Nigeria (NAN) reports that the Nationwide APC Membership Revalidation would kick-off simultaneously on Tuesday nationwide.

The VON boss praised the President for upholding the internal democracy and hence, bidding goodbye to imposition of candidates in APC.

He said: “One salutes President Buhari for promoting the doctrine of internal democracy, hence bidding goodbye to imposition of candidates in the APC during primary elections.

“I am glad that the President gave life oxygen to Section 7 (viii) of the APC constitution, which states interalia, ‘To promote and uphold the practice of internal democracy at all levels of the party’s organisation.

“Without any incentive, they must come out and defend the party at any level so that we, you and the party will feel secure and comfortable because the old-time of putting hands in the pocket is over because the money is no longer available’’.

Okechukwu further said that Buhari, as the foremost leader of APC, has undoubtedly raised the Red-Flag to ubiquitous ‘Food is Ready Politicians (FRPs)’ in Abuja, and surreptitiously reap offices meant for hardworking party members.

According to him, to avoid the huge loss inflicted on our great party by the crass imposition of candidates in the 2018 primary elections, we must avoid the Red-Flag of undue endorsement of candidates.

The VON D-G said: “For the avoidance of doubt, if not for crass imposition of candidates in our party in 2018, the stocks of our sister political party, the PDP, could have crashed badly.

“Imposition in APC elevated the fortunes of PDP, that today, they can afford to bandy fake news, make noise, fail to pay the bailout funds and subvert eloquent policies of the President like the Social Investment Programmes, and Executive Order 10’’.

Okechukwu called on APC leadership at all levels to strictly adhere to the President’s Red-Flag proclamation that the party style and structure should no longer operate from Abuja downwards but from the ward level upwards.

Category : Uncategorized
PreviousFCT Minister urges institute of town planners to address urbanisation in Nigeria
NextLawyer Caught On Zoom Stripping Naked And Having S*x During Hearing Is Slammed By Judge