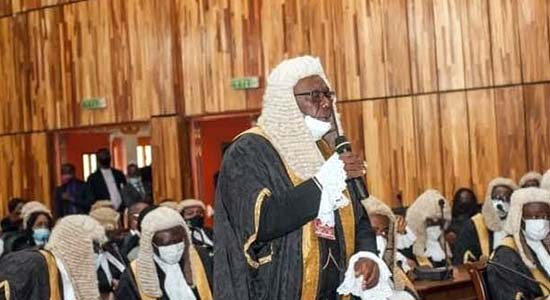 The Federal High Court on Thursday in Abuja bade farewell to late Justice Ibrahim Watila, of the Abeokuta Division, who died on Tuesday after a brief illness.

Speaking at valedictory Session in hounour of the judge, the Chief Judge of the court, Justice John Tsoho, said:” in view of the submissions made at this valedictory court session, I hereby order that the remains of Watila be interred on Jan. 30 in Marama, Hawul Local Government Area of Borno.

“May God have mercy on his soul,”the chief judge ruled.

Justice Tsoho held that valedictory court session was particularly sad and sorrowful because Watila was bubbling with life just a few weeks ago during ceremonies marking the court’s legal year and annual judges conference.

”Even though we all know that death is an inevitable end for all mortals, we are however, traumatized that it occurred this time in the life of a brother and a friend so dear to all of us,” he said.

Gadzama extolled the virtues of Watila saying that he was a humble and intelligent man who was never arrogant and whose humility was infectious.

According to him, his death came to us as a thunderbolt but death is a shirt that we must all wear.

“As Christians, we believe that only the physical body dies as the soul passes on to glory. It is our belief that Watila made the right choice and we will meet at the feet of the Lord,”Gadzama said.

Speaking on behalf of the Nigeria Bar Association, (NBA) Abeokuta Branch, Mr Wale Ajayi said that Watila was a source of encouragement and guidance to all lawyers in Abeokuta where he served before his death.

Ajayi also described the late judge as a gentleman per excellence who never used his relationship with any lawyer to influence his decision on any legal matter he was handling.