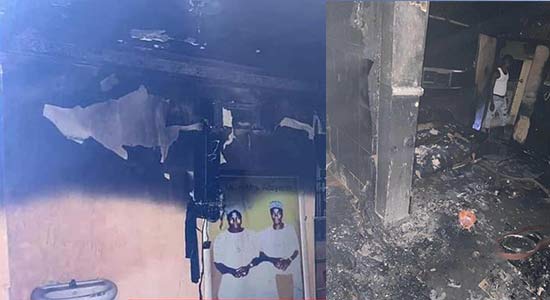 One of the houses of Yoruba rights activist, Chief Sunday Adeyemo a.k.a Sunday Igboho in Soka, Ibadan has been razed by suspected arsonists.

The fire reportedly started around 3am in the apartment located in the Soka area of Oyo State.

The source of the fire was unknown as of the time of filing this report but it was gathered that firefighters from the Oyo State Fire Service arrived at the scene a few hours after to douse the fire.

One of the Facebook user by name  Afamefuna Chidume posted “Breaking News- Sunday Igboho’s old house on Soka area of Ibadan has been set on fire, allegations are rife that same people he fought have set his old house on fire, he lived here before moving to his new house. They said it was set on fire some minutes after light was switched off in the area, wonderful!! Wonderful!! Wonderful!!.. Democratic Evangelist Don Senour.”

BREAKING NEWS- SUNDAY IGBOHO'S OLD HOUSE ON SOKA AREA OF IBADAN HAS BEEN SET ON FIRE, ALLEGATIONS ARE RIFE THAT SAME…

No statement has been obtained from Sunday Igboho on the incident.

Igboho, who is the Akoni Oodua of Yoruba land, had asked herdsmen in Ibarapa Local Government Area of Oyo State to leave within seven days.

At the expiration of the ultimatum last week, he and his followers had stormed the Fulani settlement in the ancient town to eject Seriki Fulani, Salihu Abdukadir, and herdsmen accused of perpetrating crimes ranging from kidnappings, killings, rape to invasion of farmlands with their cattle.

Some houses and property in the settlement of the Fulanis were torched last week.