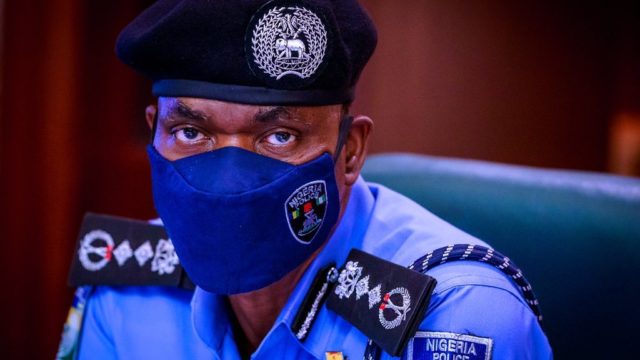 During the 2015 face-off between members of the Islamic Movement of Nigeria and the Nigerian Army, which resulted in a blood bath that snuffed the life out of several people in what was tagged Zaria Massacre by the media, the distinction between the duties of the Nigerian Police and that of their military counterparts came to question. It was a moot issue whether the police should have been called in to quell a civil insurrection in a way that disproportionate force inherent in an impasse between soldiers and civilians would be averted.

The codenaming of operations, issuing various statements and deploying soldiers in various civil disturbances have made people wonder what the actual duties of the police are in a constitutional democracy. It was clear that while the police lacked anti-riot gears to control the #EndSars rioters when ironically, they were the primary targets in the uprising, the military paraphernalia were positioned ready to be zeroed in, in a counter operation.  In the post crisis inquest organised by the Inspector-General of Police, the police leaders revealed that the commonest of anti-riot equipment like teargas cannisters were conspicuously lacking in their armouries.

There are indications that we might still be haunted by several years of military rule in our pro military dispositions and underutilisation of the Police. This trend tends to be worsened by the recycling of past military leaders and foist a mentality that regard every crisis as being secretly funded and targeted at regime change- also a psychology of a king’s paranoia in the midst of depraved subjects- hence necessitating a constitution that keeps a higher crushing might at the authorities’ disposal. Little wonder the Army chiefs must be among the anointed few whose appointment, removal or replacement requires several jabs on the crystal ball. Enemies of the state are fingered in every insurrection even if it is in the marketplaces where there are protests against the rising prices of commodities.

Warning statements are doled out from the military quarters while the available police personnel are concentrated in cohorts around the civil authorities and people that matter. The Constitution of the Federal Republic of Nigeria 1999, which significantly replicates the provisions of the 1979 Constitution regarding the Police entrenches this quasi-military pre-eminence in specific ways. Section 214 down to 216 of the 1999 Constitution merely make ‘administrative’ provisions about the Police, while Section 217 which establishes the Armed Forces in similar light, goes further to provide for the basic duties for which the Federation shall equip and maintain the Military.

A section of the Policing Law Website containing academic review of national regimes governing use of force by law enforcement officials and managed by the Human Right Centre of the University of Pretoria states: “Section 214(1) of the Constitution of Federal Republic of Nigeria establishes the Nigerian Police Force. However, the Force’s organisation, duties, and powers are set out in the 1943 Police Act (recently amended)” (Emphases mine). The tone of the author when compared to similar analysis given to many other countries‘ police units therein, is something short of approval. More suspicious is the fact that Subsection 2(c) of the Section 217 provides for “…supressing insurrection and acting in aid of civil authorities to restore order when called upon to do so by the president” as a duty of the Armed Forces. The three pillars of law enforcement under the Handbook on Police Accountability, Oversight and Integrity published by United Nations Office on Drugs and Crime (UNODC) are preventing and detecting crime, maintaining public order and providing protection and assistance for people in need.

This is also in line with the Recommendations of the European Committee of Ministers on the European Code of Police Ethics. The fact that “suppressing insurrection…” is succinctly stated in the said section with a composite duty of the Police apparently pushed to the Police Act and other national legislations under Section 214 (2) (a), made suppression of insurrection a primary duty of the “Armed Forces”. The Constitution in the said subsection, therefore, assigned a core police duty to the Military and hid the scorching effect under a bogus appendage- the presidential order in Section 217 (2) (c).

There is a possibility that these inherent lacunae have to a great extent, robbed the Nigerian Police of due government attention, eroded public confidence in the ill-equipped Police and caused uncoordinated response to civil strife, leading to rights violations of unimaginable magnitude. Michael Wasco states that major issues relating to policing should be enshrined in a constitution in his article titled Policing in Democratic Constitution and published in Indiana Journal of Constitutional Design. Though apparently overwhelmed by the said plethora of administrative provisions in Sections 214 and 215 of the Nigerian Constitution, he named Nigeria alongside Kenya and South Africa as countries that made substantial constitutional provisions regarding policing principles, mandates and governance. South Africa has the basic duties of their police termed “objects” circumscribed in Section 205 (3) of their constitution, while launching major reforms to demilitarise their country and reinforce the roles of the police in internal security.

Maintenance of public order is mentioned clearly as the core object of the police in the said Section 205 (3) of the 1996 Constitution of South Africa Republic. Kenya, which has similar challenges with Nigeria in terms of insurgency has the basic duties of their police enshrined in Section 244 of their 2010 Constitution. While South Africa made it clear in Section 200 (2) of their Constitution that the primary object of their military is to defend and protect the Republic, its territorial integrity and its people in accordance with the Constitution and the principles of international law regulating the use of force, Section 241 (3) (c) of the Kenyan 2010 Constitution states that the military may be deployed to restore peace in any part of Kenya affected by unrest or instability only with the approval of the National Assembly. A similar provision in the Section 217 of the Nigerian Constitution made it automatic that the military shall supress insurrection at the instance of the President and subject to national legislations. Both South Africa and Kenya use the term Police Service and Defence Forces respectively for their police and military while the Nigerian Constitution tagged the two security agencies Police Force and the Armed Forces, still reflecting the vestiges of military regime.

Even when the two security outfits are ordinarily performing their statutory obligations, many issues still seem to be in cross orders. Muhammed Yusuf the founder of Boko Haram Terror group was killed by the police after initial arrest by the soldiers; Terwase Akwaza alias Gana was killed by the Army shortly after arrest by the Police; the Police countered the military in claims pertaining the operation that freed the Islamiyya students saying they rescued the kidnapped children. These and several other incidents have made one wonder why coordinated approach to crisis among these two major security agents has remained such a herculean task. Apart from the age-long yearning for increased police to citizen ratio and adequate police funding, the need for diversification of police responsibilities in ways that factor in the peculiarities of a particular area’s crime and criminality remains paramount. The conscious or unconscious resurrection of indigenous security groups that defy some Federal Government directives and assume varying sophistications like a tree trunk that engulfs a rope tied around it, shows the irresistible need for robust local security consciousness.

The 10th Amendment of the US Constitution placed the federating states of America in charge of the Police. When during the Nazi era in Germany the state police were unified under the central government, the Police was subjected to abuse in the hands of the central government and Nazi Party. The Western German Constitution then placed law enforcement strictly in the hands of the state police. Then there was the Paramilitary Federal Border Guard renamed Federal Police (Bundespolizei) after the Schengen Agreement, and the Federal Criminal Police.

Finally, creating the basic duties of the Nigeria Police in the constitution averts a normative derision that has presently befallen the Force. It will form enough moral heave for government funding and build public confidence in the Force in various ways. The core police duties should be left for the police, while complementary roles are given defined strategies.  It is suggested that the duty of the Police in internal crisis as a contradistinction to the duty of the Military in responding to external threats for instance, should be in the core of major constitutional provisions regarding the two security agencies. The exceptions where both roles could be complemented by each other could then be in a national statute. More specialised units of the Police should be created and given tactical trainings in different combat areas. The routine training of these units must receive same attention that military training receives including drafting them for adequate courses abroad. The specialised units have to start right from the police academies with appropriate curriculum that suits each unit instead of random selection of officers from various divisions and giving them brief orientations with daring mouth twisting acronyms as the units’ names.

Offor, a lawyer and security analyst, writes from Abuja.