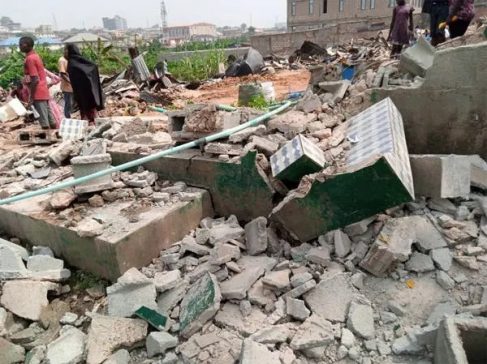 The Lagos State Ministry of Justice has set up a panel of inquiry to settle the lingering land tussle involving a Lagos-based lawyer, Monday Ubani, Gilbert Oladehinde Meadows and Engr. Akeem Ariori over Monkey Village in Opebi area of the state.

Ariori, who is the chairman, Prosperous Ariori Golden Ventures, was given a mandate by the Meadows family to develop the land at Folorunso Kuku Street in Opebi area.

Recall that Ubani had accused the Lagos state government and its agency for being biased and working in connivance with Ariori for illegal encroachment of his client’s land.

The state government on January 10, 2021 had set up a panel of enquiry to look into the disputed land and all parties were invited.

The panel later submitted their report on the land.

The panel said Ubani’s purported Certificate of Occupancy was a paper that does not have origin.

Ubani had also begged the panel to instruct Meadows and Ariori to stop work on the land, but the panel declined as the original survey of the land proved it is owned by Gilbert Meadows, adding that Ariori is an attorney to the purported land.

Counsel to Ariori, Francis Monye in his remark, said Ubani should have known that a Certificate of Occupancy is mere evidence of title, that it is a nullity where no valid title exists.

He said the proposition of the law was fairly settled.

Quoting Nnaemeka-Agu JSC in Ogunleye v Oni, Monye said: “Proof of a grant is one of the five ways of proving title. But it would be wrong to assume, as learned trial judge did in this case, that all that a person who resorts to a grant as a method of proving title to land needs to do is to produce the document of grant and rest his case.

In the instant case, what is the origin of the title of Ubani’s client, he asked, insisting that he didn’t supply the details or particulars of the Certificate of Occupancy to the general public, so his claims may be verified.

When contacted, Ubani, via a telephone call, said the land has a certificate of occupancy of over 30 years and the matter is presently in court.

Category : Uncategorized
Tags : Engr. Akeem Ariori Gilbert Oladehinde Land Grabbing Meadows Monday Ubani Monkey Village PRO
PreviousNigerian police and ghost of the past
NextMeaning of breach of contract and what a claimant in an action for breach of contract must prove