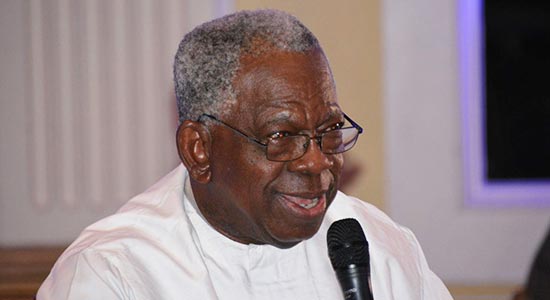 A Life Bencher and former Senator of the Federal Republic of Nigeria, Senator Onyeabo Chukwunedum Obi is reported to have died.

A Legal Practitioner and younger brother to the deceased, who earlier took to his social media had announced his death.

“Good morning All, Pending a formal announcement from the family later today, I wish to personally inform members of Otu Oka Iwu that my eldest brother and past President of Otu Oka Iwu and Bencher, Senator Onyeabo Obi, Os’oji Nnewi, passed on to greater glory yesterday at the age of 82 years. We are grateful to God for his life.

“Kindly note that due to the current COVID-19 safety protocols, physical condolence visits are not necessary or encouraged. Thank you so much”, he stated.

“Not again, lord! Os’oji Nnewi only recently chaired the birthday colloquium in honor of Chief Uwechue SAN, and was his full witty and cerebral self, as usual. Lord, please shut the door against this morbid breeze depleting our most cherished stock. No doubt Chief Onyeabor Obi was a great man of style, culture and the law, and departs this sinful world to a better place. We mourn, even as we celebrate a great life well lived for the greater good of mankind.”

“Ugwunnia, please do accept my deepest condolences on the death of Senator Onyeabo Obi. He was a quintessential gentleman and a bar man through and through. My last interaction with him was on December 10, 2020 during a webinar on International human rights day which I hosted and moderated. He was in the element and participated actively at the event and made incisive contributions. Your family will miss him but the legal community will miss him greatly. I join in praying for the repose of his soul.”

In 1961, he was called to the English Bar at Gray’s Inn. Meanwhile, he served as the Legal Adviser to the Military Governor of Eastern Nigeria between January and September 1966.

In addition, he was a Senator of the Federal Republic of Nigeria, representing Anambra West Senatorial, District, between 1979 and 1983.

Through an honorary appointment by the CJN, he served as the Vice, Advisory Committee on Rules of the Supreme Court of Nigeria since 1986.

He also served as a Nigerian member in the Panel of Conciliators, International Centre for Settlement of lnvestatent Disputes, Washington DC, USA since 1987. Also, he served as the Chairman, Committee on Procedures for Settling Disputes, Section on Business Law, International Bar Association since 1986.

Between 1977 and 1979, he equally served as the Director Nigerian Rubber Board.