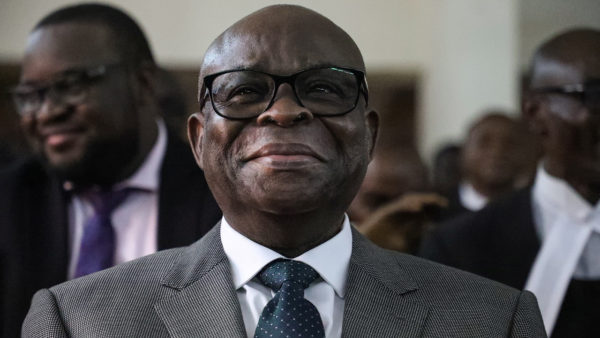 Immediate past Chief Justice of Nigeria (CJN), Justice Walter Nkanu Onnoghen, did not know he was stirring an hornet’s nest when he reflected on circumstances that surrounded his unceremonious removal in 2019.

Speaking during a dinner to mark his 70th anniversary at his residence in Asokoro, Abuja, recently, the former CJN said he was surprised at his sudden removal, noting that throughout his judicial career, he lived an upright life.

The celebrant regretted that contrary to that chaste lifestyle, “you just wake up one morning and they say you have been removed from office. Nobody was ready to tell you anything. All everybody was just saying is resign, resign. What have I done?”

The former CJN also disclosed that within two years in office as CJN, he initiated a lot of innovations and reforms that have been abandoned, adding: “You did not have to know my wife, my children or anybody close to me to get justice.”

But less than 24 hours after the former CJN disclosed that he was not confronted with the reason for his removal from office, a former governorship candidate of Peoples Democratic Party (PDP) in Enugu State, Dr. Alex Chukuwemeka Obiechina, reminded him of his assertions in 2016 that any case he (Onnoghen) dismisses should be taken to God in heaven.

While recalling the misfortune his appeal suffered at the hands of Onnoghen, Obiechina slammed the former CJN, saying he was out to denigrate Nigeria’s judicial system after his removal.

“If he was not told of his offence, what did he go to the Code of Conduct Tribunal (CCT) to defend? What was he defending at the High Courts and later, Court of Appeal? What were his team of lawyers defending in these courts or were they busybodies?

“This is a case of refusing to tell yourself basic truth. If you do not know why you were removed, go to Google and see that the world knows. You are equally saying that the rulings and judgments delivered by different courts on this matter were not based on legal facts before the courts, but merely delivered at the figments and inventions of those judges, since there was no case (any accusation against you) before them.

“By implication, as a former High Court Judge, Appeal Court Judge, Justice of the Supreme Court and CJN, you are testifying to Nigerians and the entire world to lose faith in Nigerian judiciary as judgments obtained in Nigerian courts, from your experience, are not based on law, but on extraneous factors. Was that what you were doing? If you were not doing so, why kill the system that raised you up and fed you simply because you mis-endeavoured and crashed?”

Onnoghen and Obiechian’s paths crossed in 2016. Obiechina contested the 2011 Peoples Democratic Party’s (PDP) gubernatorial primary against Governor Sullivan Chime in Enugu. At the end of the primary, Obiechina polled 424 delegate votes to beat six others, including the then incumbent, who was seeking a second term.

However, for inexplicable reasons, the party’s governorship primary committee returned to Abuja and could not lay hands on its report as well as the original results. At the end of the day, the PDP national headquarters sent in Governor Chime’s name to the Independent National Electoral Commission (INEC) as the party’s standard-bearer for the 2011 poll.

Crying blue murder, Obiechina empanelled a legal team led by Abdullahi M. Aliu (SAN) to challenge the impunity by PDP. And as expected, the case, in which INEC and two others were joined as respondents, suffered puzzling delays at both the Federal High Court and Appeal Court.‎

While the delays continued, the governorship election held and Chime won, even as a new National Working Committee (NWC) of PDP was elected. With the new leadership sworn into office, the result and report of Enugu State governorship primary of the party were found.

Buoyed by the new discovery and determined to reclaim his victory at the primary, Obiechina approached the apex court, in a motion on notice pursuant to Order Two Rule 12 of the Supreme Court Rules, 1999 and Section 6 (6) of the 1999 Constitution. In the suit, Obiechina sought the apex court’s order “granting him leave to produce, tender and rely on copies of documents, which were not tendered at the trial court and the Court of Appeal.”

Obiechina’s contention was that he contested and won the 2nd respondent’s (PDP) primary election of January 9, 2011 in Enugu State.

“The 2nd respondent (PDP) submitted Chime’s name‎ to INEC as her candidate in the said election instead of the Applicant’s name in contravention of 2nd Respondent’s Primary Election guidelines and the provisions of the Electoral Act, 2010,” part of the grounds of the appeal read.

On December 7, 2016, when the Supreme Court heard the appeal, the CJN struck out the matter.

The President explained that suspending Onnoghen was done in the execution of an ex-parte order earlier granted by the CCT on January 23, 2019.

“The CJN was said to have grossly violated the provisions of the Code of Conduct for public officers, as stipulated in the Constitution of Nigeria.”

Earlier in his response to the charges, the CJN stated in writing that he ‘forgot’ to declare some of his assets to the CCB. Although he was convicted by the CCT, Onnoghen put in his voluntary retirement in April 2019.

Nearly two years after his retirement, the former CJN used his 70th anniversary celebration to recount his travails, stressing that the authorities worked towards a predetermined outcome to remove him. And Obiechina used that opportunity to narrate his experience at the hands of the former CJN while in office.

Said Obiechina: “And drawing from this your now exposed line of thoughts, I recall I won the gubernatorial election and as INEC did not do the needful and declare me Governor of Enugu State, I approached the courts for this declaration.

“The governor then, realising that this case will throw him out of office once it is determined in court, resorted to flexing his weighty financial muscles and tentacles to ensure that the hearing was delayed until he left office. The case was strangely delayed for six years, because the courts under your watch did not give us hearing dates for this case.

“My lead counsel then, Prof. Ben Nwabueze, the foremost African constitutional lawyer, wrote you explaining that gubernatorial pre-election cases in courts are not time-barred by Nigeria’s 1999 Constitution then and that all he was seeking was that you list the novel case for hearing for him to lead a team of Senior Advocates of Nigeria. And that by citing different provisions of our constitution, they shall establish that my case was not time-barred, as I was the elected governor with no legal inhibitions to stop me from serving my four years from any date the court declares me the winner.

“You neither obliged him this request bordering on fair hearing of this case nor accorded such a legal icon the courtesy of a reply.

All you rather did was to rush to Supreme Court and as CJN and chairman of the adjudicating panel, tried prompting my counsel, Chief Udechukwu (SAN), representing Prof Ben Nwabueze, to toe a particular legal line. As you tried it twice, the wise, bold and courageous Chief Udechukwu, retorted to you in the open court “if you have taken decision on this case outside this court, but you are merely here to act it out, please tell me so that I pack my bags and go, because I am a senior member of the Temple of justice and my case ought to be treated with some sanity or fairness. I can never be coerced to thread a strange legal path!”

Obiechina recalled that morally burdened, the ex-CJN swallowed the entire insult before the watching public, only to mutter that Udechukwu should mind what he says to him (Onnoghen) as CJN and went ahead to strike off the case telling him (Obiechina) that if I am not satisfied I should report to God in Heaven.

“This was again published in national media then. Within one year of this prayer, you were disgraced out of the Supreme Court albeit in handcuffs and possibly without entitlements as due former CJNs. Indeed God Himself served you the same hot water you gave me.

“And so, all your integrity and moral grandstanding are false to me, who came near your court with serious legal issues. And l bear witness in opposite direction. Report this your matter to God if you feel shortchanged, but then, your prayer, unlike mine, may not be heard by the all goodness equity minded God Almighty,” Obiechina stated.