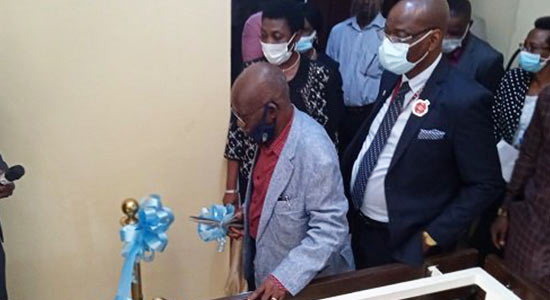 A Senior Advocate of Nigeria (SAN) Alhaji Femi Okunnu, has donated a new floor to the Faculty of Law building at the University of Lagos (UNILAG).
Speaking during the event via webinar, Okunnu said he was extremely proud and humbled to be part of the university community and the executor of the project.
The Vice Chancellor, Prof. Oluwatoyin Ogundipe, said the execution of the project is in line with his P3P vision which stands for Pick a Project, Pick a Programme and Pick a Person.
He said what Okunnu had done by donating N100 million for the vertical extension of the fourth floor of the Law Faculty building was an example of picking a project.
“Despite that we have no budget for capital project this year, God has sent divine helpers to build the university,” he said.
Prof. Adele Jinodu who represented Alhaji Okunnu at the event, described the donor as a committed intellectual who intends to give whatever he has to advance education in the country.
Dean of the Faculty of Law, Professor A.V Atsenuwa, said the Law programme started as a three-or four-year programme with an average of 80 students admitted annually. However, he said the number increased when students were admitted through the Post UTME and now admits an average of 270 students per year. She added that the Master’s programme also expanded which made the space inadequate for the students, adding that the lecturers had to share offices.
She expressed gratitude for the project despite the COVID-19 pandemic delaying its completion.

The new floor, which is the fourth floor, would accommodate the faculty board room, eight offices, two seminar rooms, a moot room with facilities of international standard that can take 80 students, as well as other designated rooms strictly for students.

Category : Uncategorized
Tags : Alhaji Femi Okunnu METRO UNILAG
PreviousAdultery Scandal: I Am Not A Member Of Moyo Family And I Never Issued Any Statement — Adetunji
NextGov. Ayade Did Not Authorize Appointment Of Magistrates And Would Therefore No Pay Them — Acting CJ, Justice Eyo