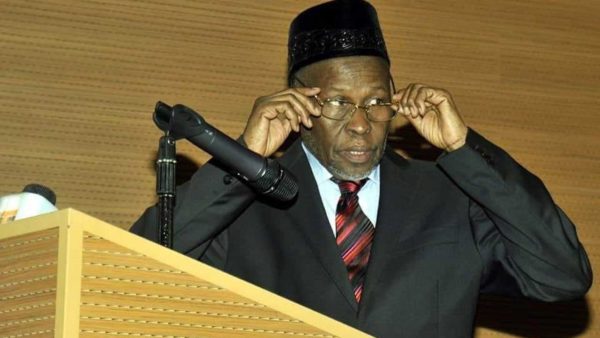 The nation’s polity began the year 2020 with the bittersweet hangover of the 2019 general election. Three months earlier, the Supreme Court had declared: “We have examined the submissions of parties in this matter and the exhibit adduced and we have come to a conclusion that this appeal lacks merit; appeal is hereby dismissed. A date for reason would be communicated to the parties.”

With that pronouncement, Chief Justice, Tanko Muhammad, who led five other Justices of the apex court, dismissed the appeal filed by the Peoples Democratic Party (PDP) and its presidential standard-bearer in the election, Alhaji Atiku Abubakar, against the declaration of President Muhammadu Buhari as winner of the February 2019 poll.

Perturbed that the apex court could not find any of the 66 grounds they filed on September 23, 2019, against the Court of Appeal ruling on September 11, Atiku and PDP said the judgment failed to do justice to the matter and refused to congratulate Buhari and All Progressives Congress (APC) as winners.

That perceived hangover raised the bar on succession politics, which became a kind of placebo for the apparent lack of good governance in the country. That development threw up contentions over the issue of which part of the nation should produce President Muhammadu Buhari’s successor. There were allegations that the north was planning to keep the Presidency in the zone despite the power rotation understanding in the country.

As it turned out, what started as a local misunderstanding within the Edo State chapter of APC snowballed into a major fissure for national insurrection by entrenched political forces against the party’s leadership. Attempts to resolve the raging battle through the courts suffered from frequent interlocutions, leading to multiple claimants of position of acting national chairman.

And, as if to validate apprehensions of overt plans to take over the party structure, the National Executive Committee of the party, working in cahoots with state governors elected on APC platform, otherwise known as Progressive Governors, dismantled the entire party machinery. A special interim management committee known as National Caretaker and Extraordinary Convention Planning Committee (NCECPC), headed by Yobe State Governor, Mai Mala Buni, was set up.

The empanelling of the Buni committee, which came after an Abuja High Court ordered that Oshiomhole’s suspension by his Etsako West Ward 1 executives be upheld, and Governor Obaseki’s defection to the opposition Peoples Democratic Party (PDP), set tongues wagging. The party was further polarised as some chieftains believed that the NWC’s dissolution was targeted at striping certain advantages from perceived presidential aspirants.

A faction went to court to challenge the unconstitutional dismantling of the properly constituted APC NWC, thus stoking the fire of fresh crisis in the embattled governing party. As a retort, the NEC reconvened, dissolved all state and zonal structures just as it elongated the tenure of NCECPC as well as expanding the committee’s assignment to include membership verification and registration.

While APC grappled with its internal challenges, it lost the Edo State gubernatorial poll, but was later to be compensated with the retention of Ondo State. Those ‘laurels’ did not obliterate the fact of serious partisan confusion in some state chapters of APC, particularly Rivers and Zamfara States.

ON its part, the opposition PDP also convulsed with internal discontent as accusations and counter-accusations of anti-party activities among party chieftains raged. In answer to the simmering disunity, the party set up a fact-finding committee headed by Bauchi State Governor, Bala Mohammed, to look into the party’s outing in the 2019 presidential poll, as well as make recommendations to avert anti-party activities and make the party more inclusive.

The dour state of PDP came to limelight when in quick succession, the immediate past Speaker of House of Representatives, Hon. Yakubu Dogara and Ebonyi Governor, Umahi, and Senator Elisha Abbo, crossed over to APC. But despite those losses, PDP maintained that Nigerians have seen through the deception and ineptitude of APC, which defeated it in 2015 and 2019 general elections.

Not least political eruption was the #ENDSARS protests Nigerian youth embarked upon to draw attention to the brutality of a unit of the Nigeria Police Force, Special Anti-Robbery Squad (SARS). But the protest almost snowballed to a political weapon, with demands for good governance creeping in before it was ruthlessly crushed by military intervention. Scared by the unprecedented synergy of otherwise docile youth President Buhari had written off as ‘lazy’, the government believed the youth were out to overthrow the President Buhari-led government. This belief led to the freezing of the bank accounts of leaders of the protesters and even arrest and prosecution of some of them.

THE 9th National Assembly suffered a great deal of credibility problems within the year 2020, stemming no doubt from the haste to ingratiate itself to the Presidency. The rubberstamp slur stuck to both chambers after the floor functionaries fell back on President Buhari’s support to emerge as leaders.

However, the nagging state of insecurity across the country threatened the buxom relationship between the federal legislature and the executive, as NASS’ desperate insistence on smooth ties with Buhari crippled their ability and responsibility to serve as checks and balances to the executive.

One of the glaring examples of government’s frustrations, particularly in the area of heightened insecurity across the country in year 2020, was the ceaseless lamentation from the National Assembly, as against its constitutional roles of putting the president and the executive arm of government on their toes.

Crippled by a resolve to remain on the “same page” with the executive, the two chambers of the National Assembly failed to go beyond lamentations, even when the executive ignored motions and resolutions.

Although Senate President Ahmad Lawan, had repeatedly debunked criticisms of allegedly switching the parliament into rubberstamp mode, it remains the position of critics within and outside the Assembly that the current leadership needs to do more to get the presidency working, particularly on security matters.

THE sad cases of terrorism and insurgency, banditry, kidnapping, and herdsmen’s attacks, which has held the country to ransom got to a climax in 2020 with the gruesome slaughtering of 67 rice farmers in Zabarmari in Borno State by the Boko Haram insurgents. It was a sad development that was closely followed by the kidnapping of over 300 Kankara students in Katsina State.

In a bid to regain their good name, lawmakers warned Lawan against preventing them from expressing their anger on the floor, because it was only when agreed that free and frank commentaries could be made. That was when the floodgate of blunt revelations began. But, all the blunt submissions and revelations remain mere advisories to be taken or rejected by the president.

Some lawmakers grumbled in subdued manner, saying: “We are tired of offering a minute silence for our slain constituents.” But they could not go further than consolations and lamentations, particularly after resolutions that service chiefs be sacked has repeatedly been rebuffed by the president.

For instance, even in the fit of anger shortly after the killing of 67 rice farmers in Borno State, lawmakers could not cross some boundaries for fear of jeopardising the friendly ties with the executive.

THE 9th National Assembly’s closest action on jolting the executive to awake to its duties was the resolution by the House of Representatives to invite President Buhari to answer questions on how his administration had handled insecurity.

The move however received serious attacks even from some leaders of the National Assembly, who later forced the House leadership to not only renege but tacitly apologised to the president for “the embarrassment” caused. It also caused some form of rift between the upper and lowers chambers, as the Senate not only distanced itself from the invitation, but also sought to align with the presidency.

The Deputy Senate President, Ovie Omo – Agege, faulted the invitation extended by the House of Representatives to President Muhammadu Buhari and described it as unconstitutional.

When a joint session was being arranged for the president to deliver address on security matters, even if behind closed-door, the Senate swiftly and loudly objected and glossed over remarks by the Attorney-General that National Assembly had no powers to summon Mr. President.

However, some gory details about insecurity, which painted the administration in bad light, continued to emerge, as the lawmakers busied themselves with mere lamentation and lame rhetoric for fear of crossing the red line.

Former Senate Leader, Mohammed Ali Ndume, who represents Borno South, revealed during one of such lamentation sessions of the Senate that the situation had become so bad that soldiers share ammunitions at the warfront in the Northeast. He said the military doesn’t have modern arms and are hardly provided with air support.

Ndume further revealed that people in Borno State are paying ransom to Boko Haram members before they’re allowed to go to their farms or move around in their villages, a claim the presidency continues to refute.

According to Ndume; “The issue of insecurity has been there. We have lamented. Committees have been set up. We have sent recommendations to the president. The reports were not implemented. There are other recommendations we have made and nothing was done. We need to take a step further. Section 14 of the Constitution is clear.

“We are just talking about security. I can tell you that people fighting war are sharing ammunitions. They have no arms or proper kits. I have gone round. I have not seen a Nigerian soldier holding a new AK47. Last week, some people came to me in Abuja and they asked for money to help them pay their dues to Boko Haram terrorists before they can harvest their crops.

“If government is serious, this terrorism can be stopped in six months. America engages mercenaries. Why can’t we get that? We will be failing in our responsibility if we fail to do the right thing.”

A former Borno State Governor, Senator Kashim Shettima, who sponsored the motion to condemn the president’s failures and inactions on security matters, noted; “If the president insists that the security chiefs are doing their work well, the logical implication is that the president himself as the commander-in-chief of the country has failed in his most rudimentary assignment of securing the nation.

“Protecting the life and property of citizens is the primary obligation of government and any government that cannot discharge this basic obligation loses any iota of legitimacy.”

Shettima further noted; “From the 1st of January (2020) to this day, we have had 2,800 attacks in Borno State. Boko Haram fighters are virtually ruling all our rural areas. They kill and abduct people at will. They’re targeting farmers and this will create hunger in the North. Government officials keep saying that Boko Haram has been technically defeated. This claim is not true.”

Supporting the allegation of poor performance, the Senator representing President Buhari’s Senatorial District in Katsina, Ahmed Baba Kaita, said: “The time of truth has come. This situation is no longer acceptable to any Nigerian. We can’t be mourning our citizens in and out everyday. We can’t accept the explanation from those who should do the right thing whenever there is an attack. If the statement from Garba Shehu is true, that’s very irresponsible.”