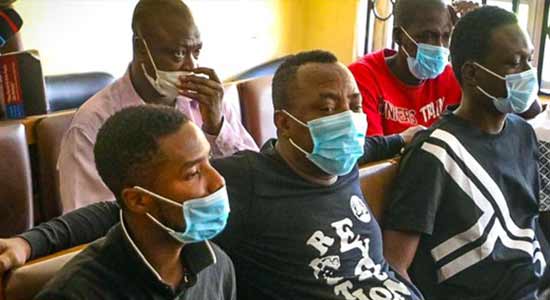 The Federal Government (FG) has arraigned the Convener of #RevolutionNow, Mr. Omoyele Sowore and 4 others before the Chief Magistrate Court, Wuse Zone 2 Abuja on Monday.

The four of them were arraigned on a three count charge of criminal conspiracy, unlawful assembly and public disturbance.

ASKLEGALPALACE recalls that Omoyele Sowore had earlier taken to his Twitter handle calling for a crossover protest in protest against the administration of the President Muhammadu Buhari.

However, he was arrested on 31st day of December, 2020 in Abuja alongside some other persons for leading the protest.

Meanwhile, on Monday, the Federal Capital Territory (FCT) Police Command had arraigned him before the Magistrate Court on the above charges.

After taking their pleas, they had pleaded not guilty to the charges.

The prosecution was led by J.C.A Idachaba, together with Adama Musa and D.J Emenike, while the defendants are being represented by Femi Falana Chambers.

Meanwhile, the Magistrate asked if Sowore gave the mandate to be represented by one Mr. Marshal from Falana Chambers which he answered in the affirmative.

Furthermore, the Magistrate noted that the 1999 Constitution gives Sowore and others facility to prepare for their defence.

However, the Magistrate court in Abuja has ordered the remand of Omoyele Sowore and four others at Kuje Correctional Centre pending when their formal bail application will be heard tomorrow, January 5, 2020.