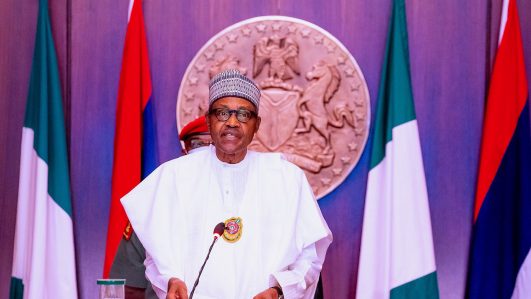 Nigerian President Muhammadu Buhari on Friday reinstated that his administration will fulfill the five demands of the #EndSARS protesters.

This is coming months after the EndSars protesters released their “five demands” to the government on October 11, which include disbanding the unit, but also releasing activists from jail, prosecuting poor police conduct, evaluating and retraining officers, and increasing the salary for agents.

The protests described by Buhari as “understandable” were against the Special Anti-Robbery Squad (SARS) of the Nigerian police force which has been associated with harassment of innocent citizens, extortion at gunpoint, and extrajudicial killings of suspects.

Although the Nigerian government in October agreed to meet the five demands, the government has since been accused of lip-service to the demand.

The unit has since been disbanded while over 20 state governments have set up judicial panels to investigate human rights abuses by the squad.

While many detained protesters were released during the heat of the protest, some have been picked up after the protests were hijacked by hoodlums, following an attack on peaceful protesters by security operatives at the Lekki toll-gate plaza.

Also, there have been allegations of a witchhunt against popular supporters of the #EndSARS. While some have been unduly picked up by police, others have had their bank accounts restricted to date.

Also, a Nigerian lawyer and major mobiliser of the #EndSARS movement, Modupe Odele, on Thursday said she has been forced to go on exile due to immigration woes.

“You force me to go on exile from my own country for no crime. I can’t visit and go as I please anymore,” Odele said in a tweet.

Experts have said concerted efforts by the Nigerian Government to address the five demands would boost the trust of the #EndSARS protesters and the supportive Nigerian diaspora.