Nigeria, Ghana, others face bottlenecks as AfCFTA kicks off today
Editor
January 1, 2021
7:59 am 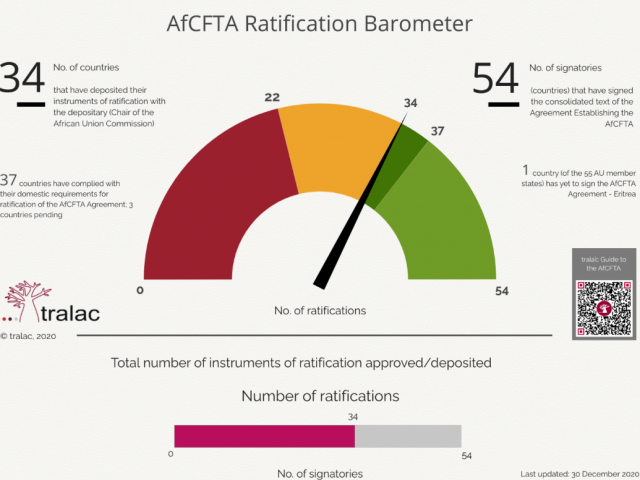 Though Nigeria ratified the African Continental Free Trade Area (AfCFTA) agreement, which is set to commence implementation today, there are concerns about the country’s readiness to take advantage of the trade deal as a result of lingering challenges, especially as it relates to border control and customs procedures.

While many small businesses are unaware of details of the trade deal according to a recent survey by the Organised Private Sector, raising concerns about Nigeria’s implementation strategy, a large majority expressed worry about increased competition from other countries, despite the challenging business environment in the country.

Specifically, pre-existing nuances that are peculiar to African markets in terms of alignment with Western partners, language, visa restrictions, currency, insecurity, Customs Union, existing trade agreements in regions, dependence on commodity exports, infrastructure, low manufacturing activities among others, raise concerns about the expected progress from the AfCFTA market. Similarly, with the outstanding issue of Rules of Origin (RoO) dominating negotiations, the African Union (AU) has equally stated that the principle of reciprocity would define the exchange of tariff concessions between state parties under the AfCFTA. With free movement of persons within the continent still a major challenge, there are also concerns about how services would be effectively rendered without harassment and intimidation among trade partners.

According to the Organised Private Sector, the AfCFTA serves as an avenue for local industries in Nigeria to penetrate new markets and establish strong cross-border supply chains with other African countries, even though it also poses new competitiveness risk for many firms especially for those in the real sector.  This is because, the AfCFTA single market eliminates tariffs on 90 per cent of goods produced on the continent, offering investors potential economies of scale; enabling them, in theory, to manufacture goods in one country and export them tariff-free to the whole continent, if the goods are not on the exclusive list of the destination country.  Though the Minister of Industry, Trade and Investment, Adeniyi Adebayo, said the Nigerian government was irrevocably committed to the success of the AfCFTA, local producers noted that Nigeria was not in a position to benefit from the various opportunities due to poor trade infrastructure; hostile trade environment, especially among the country’s neighbours; high level of trade malpractices; and limited trade capacity fuelled by supply constraints, among other issues. While the minister claims that the AfCFTA complements Nigeria’s export diversification aspiration as it provides preferential market access for Nigerian products and services in the vast African market, Nigeria’s export remains dominated by oil and regional trade has been very low due to the border closure.

MANUCFACTUERS Association of Nigeria (MAN), had insisted that key technical concerns like the crafting of robust national negotiation mandates, the Rules of Origin, phased liberalization, the developing and less developed countries dichotomy, schedule of specific tariff items in the basket for Trade in Goods, should be addressed with a strong commitment on the part of the government to enhance competitiveness. “The high-cost operating environment, the dearth of basic infrastructure and uncompetitive nature of manufactured products may constrain Nigeria from securing maximum trade benefits”, the Manufacturers Association of Nigeria (MAN). A lack of adequate modern transport infrastructure also impedes traders’ desire to reap the full benefits of free trade, studies show. With the right transport infrastructure and high integration, manufacturers of consumer goods could earn up to $326 billion per year, according to McKinsey & Company, a U.S.-based management consulting firm. And according to the World Bank, it takes about three and a half weeks for a container of car parts to be cleared by Congolese customs. While East African countries, Tanzania and Uganda have established a one-stop border post to slash time for cargo movement between them, new delays in the form of divergent standards for goods have quickly emerged, underscoring the mutating nature of non-tariff barriers.   Only recently, a Financial Times report revealed that the gridlock at the Apapa port terminals has become so devastating to the point that business entities pay more than $4,000 to truck a 40ft container 20km to the Nigerian mainland, almost as much as it costs to ship a container about 12,000 kilometres from China. The AfCFTA is expected to lead to the creation of a single continental market of more than 1.3 billion people, with a combined yearly output of $2.2 trillion.

Having entered into force on May 30, 2019, after receiving approval from 54 out of the 55 African Union member states, the agreement, making Africa the largest global trading bloc since the establishment of the WTO in 1994, aims to boost intra-African trade, reduce dependency on foreign markets, and ultimately boost economic collaboration between African states. To however achieve these objectives, many African nations have to reduce red tapes undermining regional trade. Already, exports within the region currently make up a mere 19 per cent of total trade volumes, which pales in comparison to intra-Asia trade at 59 per cent and intra-Europe at 69 per cent. The latest African Trade Report (ATR) by Afreximbank notes that informal cross-border trade (ICBT), which is a key component of intra-African trade, is wide-spread in its composition and estimates that in Eastern African ICBT is very high and could be worth as much as 80% of the value of formal trade in some countries.    Despite declining by 4.7 per cent, Nigeria’s share of intra-African trade remained constant at about 7 per cent as the country emerged as the third-largest intra-African trade country. According to the Director-General of the Lagos Chamber of Commerce and Industry (LCCI), Dr. Muda Yusuf, many small businesses depend on cross border trade for a living, while many manufacturers also leverage the ECOWAS Trade Liberalisation Scheme (ETLS) to boost their businesses and source their raw materials from countries in the sub-region. “The biggest challenge with border management is an institutional issue.  We need to demand accountability from the institutions that have the responsibility for border policing and management,” he added. In his recent presentation titled, ‘AfCFTA Trade in Goods Protocol: Manufacturers’ Readiness’, Director, Economics & Statistics Department, MAN, Dr. Oluwasegun Osidipe, said the private sector was not ready for implementation of AfCFTA due to the uncompetitive state of Nigeria’s production environment in recent times, adding that capacity utilisation in manufacturing had hovered between 50 and 57 per cent in the last five years. He admonished manufacturers to incorporate a high level of value addition, stressing that research had shown that the taste of consumers was changing rapidly. He urged Nigerian manufacturers to capitalise on the opportunities of the trade agreement, saying that it was necessary for the private sector to strategically position itself to ensure that other laws that would enhance gainful participation were enacted. He further urged them to advocate the resolution of challenges such as trade malpractices, insecurity, poor trade facilitation and infrastructure, porous borders, among others, while engaging the leadership of the National Assembly with the necessary information that could facilitate beneficial regional and continental parliamentary engagements.

As of November 2020, negotiations were on-going to finalise the key aspects of the outstanding AfCFTA deal, as African Union Ministers of Trade noted significant progress in the finalisation of additional Rules of Origin.

It is expected that further substantive progress will be made in the conclusion of additional outstanding chapters on Rules of Origin in the next round of negotiations in an effort to unlock and finalise commercially and mutually beneficial tariff offers. In considering outstanding Rules of Origin, AMOT emphasised the importance of concluding Rules that promote and enhance a “Made in Africa, Grown in Africa, and Designed in Africa” approach. RoO are the criteria, which establish the nationality of a product, which have been used by many African countries to gain preferential treatment while trading with other blocs like the European Union and the United States. The continent possesses a number of regional economic communities (RECs – UNCTAD lists eight), each of which has its own RoO. The problem is that these existing RECs’ RoO vary a lot. This has created an extremely complex situation across the continent.

According to a UNCTAD report last year, though Rules of Origin are ruled that determine the country of origin of goods, and are essential to the free circulation of goods in preferential trade areas, it is one of the aspects of trade that people don’t really talk about. Besides, UNCTAD said total elimination of tariffs under the AfCFTA could increase the Gross Domestic Product (GDP) of every African country by three per cent, adding that appropriately designed RoO could significantly boost intra-African trade. The Center for International Private Enterprise (CIPE) in its report on the effect of the African Continental Free Trade Area on Medium Small and Micro-scale Enterprises in Nigeria, noted that two-thirds of the 1,800 MSMEs surveyed declared not knowing of the deal’s existence. According to CIPE, this lack of knowledge is particularly acute among smaller businesses and can represent an enormous obstacle to the successful uptake of AfCFTA.  The report showed that the knowledge deficit is compounded by the reported under-utilization of previously-entered into FTAs as a result of their complicated compliance requirements.

Among respondents aware of the Agreement’s existence, the study equally found general optimism about businesses’ ability to make the most of its opportunities. “Nevertheless, many were somewhat worried by the prospects of more competition and reported a strong need for government investment in electrification and general transport infrastructure to enable them to compete effectively”, the report added.