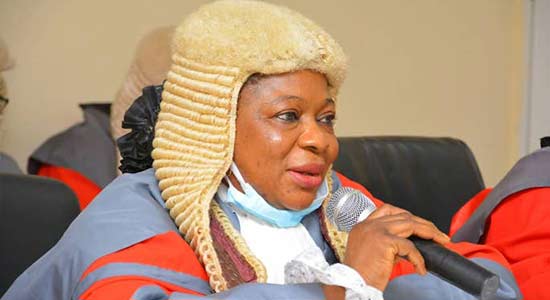 She is Justice Aisha Bashir who was until her appointment was the Senior Justice and next in rank at the State High Court on an acting capacity.

In the same vein, a cross-section of women in Nasarawa State has thrown their weight behind the leadership style of the State Governor, Engr. Abdullahi A.Sule, for setting the ball rolling towards women emancipation in the State with the appointment of the first female Chief Judge, Justice Aisha Bashir.

They said they anticipate the inclusions of women at the Local Government holding political positions just as they set example with the Governor of Kogi State, Alhaji Yahaya Bello recently.

The women noted that the inclusion of women in governments’ key positions will avail them the political opportunities in the general elections come 2023.

The league of women who pleaded anonymity appreciated the Wife of Nasarawa State Governor, Hajiya Silifat Abdullahi A.Sule, for her strategic networks with the State Ministry for Women Affairs and all focused women organizations in the State to speak with one voice as the saying goes, behind a successful man is a humble, respectful, understanding, embracing, focused and hardworking woman as they chanted “NO WOMAN NO STATE”. “NO STATE, NO NATION”.

The Constitution of the Federal Republic of Nigeria 1999 as (Amended) specifically by the provisions of Section 291 (2), pegged the mandatory retirement age of a Judicial Officer of a High Court of a State at 65 years of age.

To this end, Hon. Justice Suleiman Umaru Dikko who was born on the 31st December, 1955 culminating to the 65 years as at today 31st December, 2020 which is the mandatory retirement age.

Speaking at the valedictory Court Session of the outgoing Nasarawa State Chief Judge, Justice Suleiman Umaru Dikko, the Senior Advocate of Nigeria, Dr Hassan Lima lamented on how Private Bar in the State are not being considered in the process of appointment for judicial officers which according to him it is always characterized by unhealthy bickering and competition aimed at bringing down one another.

“However, as much as I am from the private Bar, I have never personally had a cause to discriminate or put any distinction against the esteem members of the profession who are of the Public Bar either those from the Bench or from the State Ministry of Justice or other related Public Offices”.

Also speaking at the valedictory Court Session of the State Chief Judge of Nasarawa State, Hon Justice Aisha Bashir who is now the Acting Chief Judge, said that the Chief Judge would have done better if the State judiciary was properly funded and urged the State Government under the leadership of Engr Abdullahi Sule to look into the lingering issues of non implementation of promotion, annual increments and half salaries of some judiciary workers in the State.

While thanking the government and the good people of the State, the outgoing Chief Judge, Justice Suleiman Umaru Dikko said that it was really heart warming working on the capacity of Chief Judge.

The valedictory Court Session in honored of the outgoing Chief Judge of Nasarawa State has in attendance Governor Abdullahi Sule, Emirs, past and present Chief Justices of Federal and State Courts across Nigeria.