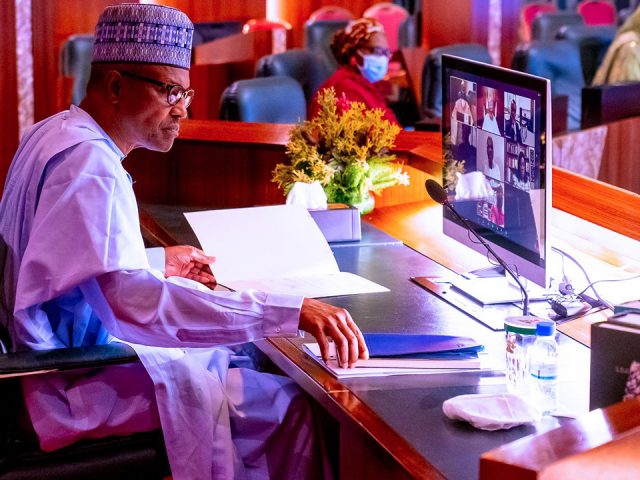 President Muhammadu Buhari has assented to 2021 N13.588 trillion Appropriation and 2020 Finance Bills with a stern warning to revenue agencies and others to meet their targets.

During the briefing, which held yesterday at the State House, Abuja and was attended by Vice President Yemi Osinbajo; Senate President Ahmad Lawan; Speaker Femi Gbajabiamila; Secretary to Government of the Federation (SGF), Boss Mustapha; Minister of Finance, Budget and National Planning, Mrs. Zainab Ahmed and other top government officials, the Nigerian leader recalled that the National Assembly passed the budget on December 21, 2020, totaling N13, 588, 027,886, 175.

He said: “We are intensifying our domestic revenue mobilisation efforts so that we can have adequate resources to fund the 2021 budget. Revenue-generating agencies, and indeed all ministries, departments, and government-owned enterprises, must work very hard to achieve their revenue targets, control their cost-to-revenue ratios, as well as ensure prompt and full remittances.

“Relevant agencies are to ensure the realisation of our crude oil production and export targets. Heads of defaulting agencies are hereby warned that they will be severely sanctioned. I also appeal to our fellow citizens and the business community, at large, to fulfill their tax obligations promptly.”

Buhari expressed delight that despite the disruptions caused by the COVID-19 pandemic, implementation of the 2020 budget surpassed previous thresholds.

“In spite of the adverse impact of the coronavirus pandemic on the nation’s economy and government’s revenues, we have made appreciable progress in the implementation of the 2020 budget. As of December 2020, we had released about N1.748 trillion out of the N1.962 trillion voted for critical capital projects, representing a performance of about 89.1 per cent.

“The overall performance of the 2020 budget currently stands at an impressive rate of 97.7 per cent. This commendable outcome underscores the importance of our efforts, together with the legislature, to return to a January to December fiscal year. The Minister of Finance, Budget and National Planning will provide further details on the 2020 budget’s performance in due course,” he stated.

The President commended the two legislative chambers for completing “the important appropriation process in good time”, adding: “The passage of the 2021 federal budget before the commencement of the 2021 fiscal year is in confirmation of our resolve to maintain a predictable January-December fiscal year, as provided for in the Constitution of the Federal Republic of Nigeria.”

Buhari said in designing the 2021 budget, the government deliberately chose to pursue an expansionary fiscal policy, reiterating that it would accelerate the economic recovery process, promote social inclusion, and strengthen the resilience of the economy.

“As you are all aware, our economy recently lapsed into its second recession in four years. I mentioned during the presentation of the 2021 Appropriation Bill that we intend to use the budget to accelerate our economic recovery process, promote social inclusion, and strengthen the resilience of the economy. All ministers are to ensure that their supervised ministries, departments, and agencies achieve the objectives set for their sectors,” he reiterated.

The President indicated that he was set to forward a borrowing plan to the National Assembly since the 2021 budget had a deficit, just as he also revealed that in view of the amendments made to the executive proposals by the lawmakers, he would revert to parliament for amendments, virements or other necessary adjustments.

Fielding questions from reporters after the ceremony, Lawan hailed the parliament for moving away from the hitherto unpredictable budget cycle and facilitating the passage of the fiscal document as well as the 2021 Appropriation Bill before the end of last month.

“It is very important that the members of the National Assembly, distinguished Senators of the Federal Republic of Nigeria, honourable members of the House of Representatives are commended for keeping this January to December budget cycle alive,” he noted.

In his contribution, Gbajabiamila commended the swift passage of the document, stating: “To those who thought 2020 January to December cycle was a fluke, this is the second time. It was not a fluke. It’s due to determination, commitment, dint of hard work, and knowing exactly what this government wants to do.”

On debt servicing, the Speaker said the development had become inevitable, observing: “For a country to develop and have an ambitious development plan, it’s almost inevitable that you borrow.”

He continued: “What is important is: what are you borrowing for? How do you apply for the borrowed funds? It’s about the application of the borrowed funds. Is it for productivity or is it just for overhead and the rest of them? And that is where the National Assembly comes in.

“You left that out of Mr. President’s statement. I heard him saying clearly that CSOs will also cooperate on this matter. Their conditions are precedent. He talks about transparency regarding the borrowed funds. So, those are the things we need to look out for. Where is this money going? Is it transparently and judiciously expended?

“And I believe the answer is clearly yes. If you don’t have money to inject into the system based on your revenue profile, and you want to develop, how do you do it? You are straightjacketed. It will affect everybody.”