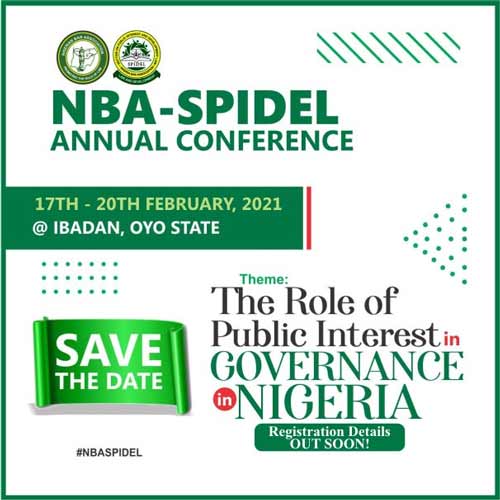 Theme: “The Role of Public Interest In Governance In Nigeria”

The annual conference of the Nigerian Bar Association (NBA) Section On Public Interest & Development Law (SPIDEL) has been fixed for February, 2021.

This is contained in a statement issued by the Conference Planning Committee Chair, M.O Ubani and Secretary, Wole Jimi-Bada which was made available to ASKLEGALPALACE.

Meanwhile, the Conference Planning Committee has 37 members as approved by the NBA-NEC.

However, the three days conference with the theme “The Role of Public Interest in Governance in Nigeria” is expected to be lucidly engaging and eye-opening.

THE ANNUAL CONFERENCE OF SECTION OF PUBLIC INTEREST AND DEVELOPMENT LAW(SPIDEL) OF NBA 2021.

The National Conference of Section on Public Interest and Development Law(SPIDEL) is billed to hold between the 17th and 20th of February, 2021 at Ibadan in Oyo State.

Recall that the last Conference of the Section took place in Aba, Abia State and was a tremendous success as everyone that participated attested to the richness of the Conference that was clinically executed by the Chairman of the Section, Mr Paul Ananaba SAN and the Conference Planning Committee headed by Mr Chibuike Nwokeukwu SAN. Next year’s conference with the central theme of “The Role of Public Interest in Governance in Nigeria” promises to be an earthquaking event that will attract the creme de la creme of the noble profession and the political class in Nigeria.

The three day event will be enriching with various sub topics like “Public interest and the respect of the rights of citizens to protest against certain policies of government, The legality of Commission of Inquiry of the State Government over Police Brutality, Enforcement of Judgement that has become burdensome in our jurisprudence and the matter of Locus Standi in the light of the recent Supreme Court case of Centre for Oil Pollution Watch Vs NNPC amongst other topics.

The event taking place in the ancient city of Ibadan in the South West promises to be an experience every lawyer whose interest is geared towards serving the cause of the masses will treasure for a long time. The various speakers that will be Resource Persons for the Conference will include the best array of experts on Public interest litigation, top political decision makers and the shakers and movers of the Nigerian Economy.

The Conference shall be declared open by the hardworking Governor of Oyo State, His Excellency Mr Seyi Makinde who has in his cabinet two active members of the Bar that were recently elevated to the rank of Silk. We are talking about the Chairman of the Local Conference Planning Committee, Mr Abiola Olagunju who is heading the State Independent Electoral Commission and Professor Oyelewo Oyewo, the current Attorney General and Commissioner for Justice of the State. These two men will be pivotal for the successful hosting of the Conference next year in Oyo State.

The indomitable President of the Nigerian Bar Association Mr Olumide Akpata, the Head of the Secretariat Mrs Joyce Oduah, and the entire National Officers, including the National Executive Committee of the Bar have expressed their support for the forthcoming conference that promises not to be forgotten in a hurry for a long to come in the annals of NBA. The following are the Chairman, Secretary and Members of the Conference Planning Committee that was approved by the National Executive Committee in a meeting held sometime in 2020.