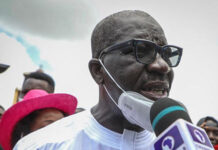 The APC is calling its first witness in the suit filed in July this year against Obaseki, who became the state governor in 2016 on its platform.

In the suit, which has barely 16 days before it lapses, the APC and one of its chieftains, Williams Edobor, are claiming that Obaseki allegedly forged his first degree certificate with which he used in securing his candidacy in the last September governorship election, hence he should be disqualified.

The court in September 2020 after deciding that rulings in all applications as well as objections would be delivered alongside judgment, ordered the APC to call its witnesses to prove allegations made against Obaseki.

At yesterday’s proceedings, the plaintiffs, through their lead counsel, Chief Akin Olujimi (SAN), called in their first witness, Edobor, a professor of Law from the University of Benin, who presented various documents to prove that the Bachelor of Arts in Classical Studies, which Obaseki submitted to the Independent National Electoral Commission (INEC) in aid of his qualification for the 2020 governorship election was forged.

Although, the defendants had used the same documents to cross-examine the witness, the documents were, however, not admitted following defendants claim that Edobor was not the maker, and as such, cannot tender them.

But the position of the plaintiffs was that the said documents sought to be tendered were the same documents of Obaseki in his defence.

However, during cross-examination by Obaseki’s lawyer, Ken Mozia (SAN), the witness, who identified the University of Ibadan Bachelor of Arts in Classical Studies certificate issued on July 6, 1979, to Obaseki, observed that while the signature of the vice chancellor was very clear, that of the registrar was “not legible.”

On the qualification for direct entry into the university, the witness told the court that candidates with Advanced Level or Higher School Certificate (HSC) are admitted for a three-year degree programme, and went ahead to confirm Obaseki’s HSC certificate issued to him by the West African School Certificate (WASC) in June 1976.

Professor Edobor also told the court that he has never seen the original of the HSC WASC certificate issued to Obaseki in 1976.

He also told the court that his allegation of forgery against Obaseki was based on photocopies of certificates Obaseki presented to INEC.

Edobor alleged that there were two BA degrees Obaseki presented to INEC, adding that in the one of 2020, the signature of the registrar was not legible.

While he told the court that he did not report the alleged forgery to the police because it was not his duty to do so, he, however, said he was not aware that Obaseki was prosecuted by any court for forgery of certificate.

However, counsel to INEC, Mr. Bawa, told the court that his client has no question for the witness.