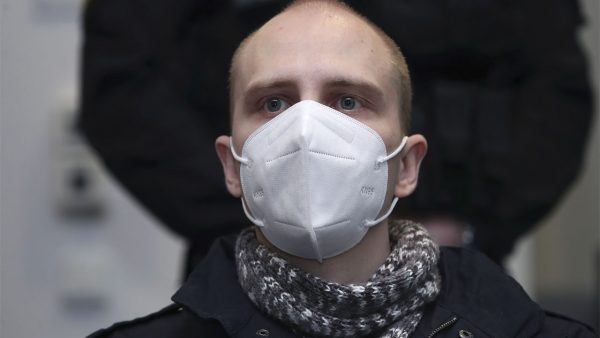 A bolted door at the synagogue in the eastern city of Halle with 52 worshippers inside marking Yom Kippur, the holiest day of the Jewish year, was the only thing that prevented the heavily armed attacker from carrying out a planned bloodbath.

After failing to storm the temple on October 9, 2019, Stephan Balliet, 28, shot dead a female passer-by and a man at a kebab shop.

“Without that famous reinforced door, he would have committed a massacre,” presiding judge Ursula Mertens said as she read out the verdict.

During his five-month trial, Balliet denied the Holocaust in open court — a crime in Germany — and expressed no remorse to those targeted, many of whom were co-plaintiffs in the case.

He was convicted of two counts of murder and multiple counts of attempted murder in a case that has deeply rattled the country and fuelled fears about rising right-wing extremism and anti-Jewish violence, 75 years after the end of the Nazi era.

The prosecution had demanded a life sentence for Balliet. The defence team asked Mertens only for a “fair sentence”.

The head of Germany’s Central Council of Jews, Josef Schuster, welcomed the verdict.

“This is an important day for Germany,” he said in a statement. “The verdict makes clear that there will be no tolerance for homicidal hatred of Jews.”

A lawyer for nine of the co-plaintiffs, Mark Lupschitz, told AFP Monday the trial had been “fair” and called the proceedings both “stressful and empowering” for the intended victims.

During the trial, Balliet insisted that “attacking the synagogue was not a mistake, they are my enemies”.

Dressed in military garb, he filmed the attack and broadcast it on the internet, prefacing it with a manifesto espousing his misogynist, neo-fascist ideology.

The attack bore some of the hallmarks of two carried out and similarly live-streamed some months earlier in Christchurch, New Zealand by Brenton Tarrant, who killed 51 people. Balliet cited Tarrant as an inspiration.

“If that guy would have been able to get into a synagogue… it would have had a tremendous impact on German identity after the war and the fight against anti-Semitism,” he told AFP in an interview.

“Anti-Semitism is indeed a phenomenon that attacks the very democratic essence of Germany and I think that is the thing that is so important to protect.”

A few dozen demonstrators against right-wing extremism had gathered outside the courthouse before the verdict was pronounced, stretching out a large black banner that read “We remember the victims of the attack of October 9, 2019”.

Prosecutor Kai Lohse said during the trial that Balliet had acted on the basis of a “racist, xenophobic and anti-Semitic ideology” to carry out an attack against not only those he killed but “Jewish life in Germany as a whole”.

The events that unfolded were like a “nightmare”, he added.

“At the end of this nightmare, the perpetrator murdered two people and injured and traumatised numerous others.”

Baillet “described the fatal shots fired at his two victims in Halle without emotion” and appeared disappointed that he had failed in his attempt to enter the synagogue, psychiatrist Norbert Leygraf said of the defendant in an evaluation.

He said Balliet suffered from symptoms of schizophrenia, paranoia and autism preventing him from having “empathy with others” while feeling “superior to others”.

The government’s point man against anti-Semitism, Felix Klein, called the trial “a good opportunity to bring about debate in society about anti-Semitism”.

Crimes targeting Jews and their belief have risen steadily in Germany in recent years, with 2,032 offences recorded in 2019, up 13 percent on the previous year.

Meanwhile a string of far-right terrorist attacks have shocked Germany including the assassination of pro-refugee politician Walter Luebcke at his home in June 2019 and the murder in the western city of Hanau of nine people of migrant origin in February.