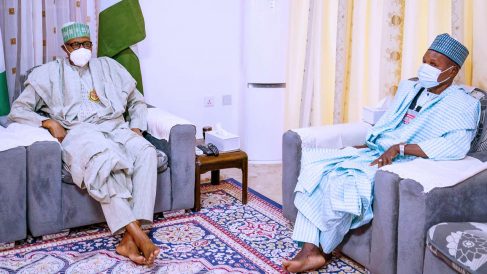 Masari, in an interview aired on the Nigeria Television Network (NTA) 9pm news, said the students were initially held hostage in the forest in Zamfara state since their abduction.

He, however, said they were released after much negotiations with their abductors, and that they were on their way to Katsina as at Thursday night.

He said it was agreed that miliary operatives kept from using force to rescue the students, so that there would be no collateral damage.

“Yes, the students have been released by their abductors. 340 of them are currently being transported from Zamfara forest to Katsina State Government House this night (Thursday).

The governor’s spokesman was however silent on whether ransom was paid for the release of the schoolboys.

At time of this report top government officials, including security agencies were heading to Kankara to receive the children.

More than 300 students were abducted last Friday night in the Kankara school, where a policemen guarding entrance to the school was shot.

He is recuperating at the hospital, even as parents of the abducted vistims had continued to keep vigil since the incident occured some six days ago.