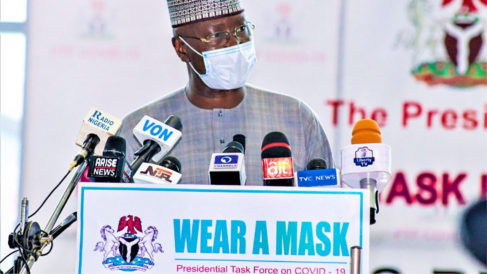 The Presidential Task Force (PTF) on COVID-19, says there were indications that the country had entered a second wave of infections.

Chairman of the PTF and Secretary to the government of the Federation (SGF) Mr Boss Mustapha, who gave the indication, lamented the risk of not just losing the gains from the hard work of the last nine months, but also losing precious lives of citizens.

The News Agency of Nigeria (NAN) reports that the PTF’s concerns were being expressed ahead of next week’s submission of its end of term report to the President on Dec. 22, 2020.

Speaking at the national briefing on Thursday, the PTF chairman, who was represented by the Minister of Aviation, Sen. Hadi Sirika, said: “the events and statistics of the last two weeks, within and outside Nigeria, have been very mixed.

“On the one hand, the cheering news of the COVID-19 vaccine, while on the other hand, we have witnessed spikes in number of infections at home and abroad.

“The real threat is upon humanity and the progress made in the global health sector in the last five decades or more.

” In Nigeria, the indication is that we have entered a second wave of infections and we stand the risk of not just losing the gains from the hard work of the last nine months but also losing the precious lives of our citizens.

“The PTF believes that if we do the right things, adhere to the NPIs and step up our testing and detection, loss of lives will be minimised and the rising curve will begin to flatten”, the chairman said.

Mustapha further stated: “we are in a potentially difficult phase of the COVID-19 resurgence; accessing the hope offered by the arrival of the vaccine is still some time ahead.

”Vaccines alone cannot cure the virus, rather, but a combination of initiatives, including the NPIs; that more than ever before, we need compliance.”

The SGF also stated that the PTF “shall escalate our risk communication and community engagement strategies to higher levels.

“Lives have been lost, but we must slow down the pace of the spread; and at the rate at which the numbers are rising should be examined and our vigilance and compliance with the NPIs should be intensified,” he said.

On the report to be submitted next week, Mustapha said: “Last Tuesday, the PTF held the end of term technical session. It afforded the PTF the opportunity to assess the progress made and the present dangers that confront us.

“The report of the PTF will be submitted to the President on Tuesday, 22nd December, 2020. Current realities, however, point to the fact that the course of further opening up of the economy may have to be reviewed,” he said.

While cautioning Nigerians ahead of the Christmas season, the PTF said: “the festive season is here and we remain conscious of the fact that large gathering events will take place.

” It is our strong advice that all non-essential trips be cancelled outrightly. We also urge citizens to avoid large gathering events,” he added.