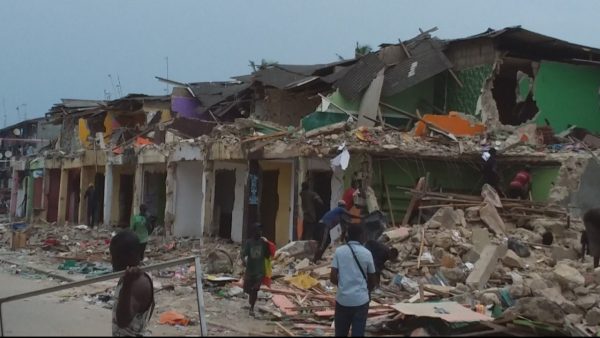 Some Festac Town residents and traders in Lagos State on Tuesday expressed shock and anger over the demolition of the Oyinlola Market popularly called ”23 Road Market” by government.

They said the demolition showed the state government’s “insensitivity” to the plights of the people, especially as the Coronavirus (COVID-19) had brought untold hardship to them.

Some traders, in a separate interview with the News Agency of Nigeria (NAN), said they had yet to ascertain why the market was demolished as they were not officially informed by the market leaders.

According to them, the demolition occurred a day after the market leaders said everything was okay.

NAN recalls that the market was demolished on Dec. 12 by the Amuwo Odofin Local Government.

A trader, Mrs Chidinma Ifyaku, said it was sad that the traders were not told the main reason for the demolition.

”Some people say the market has been sold. Nobody knows exactly what the problem is.

“Even the day before the demolition, the market executives were ringing bell, telling us not to worry because there would be no demolition. They are just adding to our frustration.

“Even if they wanted to demolish the market, knowing how rough the year has been as a result COVID-19 lockdown and #EndSARS protests, they ought to have been considerate.

“They should have waited for us to finish Christmas sales since they were bent on demolishing the market,” she said.

Another trader, Olusegun Ogundipe, said the reasons for the demolition were not enough to warrant an action of such magnitude.

He said: “What we heard was that the market was demolished because some people were selling drugs and living in the market.

”Why can’t government deal with the situation without demolishing a well-built structure?

Another trader who spoke on condition of anonymity lamented her loss and said many traders had already stockpiled their shops in anticipation of Christmas sales.

“The market leaders are our problem; they hid everything from us. We just heard it like a rumour.

“The matter had been on for years but they didn’t tell us about it, rather they sold their own shops.

“If we knew it was this serious, we wouldn’t have stocked up in anticipation of Christmas sales. Now I have to depend on orders and home deliveries,” she said.

A trader who simply wanted to be referred to as Elizabeth said it was difficult to believe that the government would demolish an already constructed market, just to rebuild.

“Can you believe that? The market was well-structured. The ones they demolished have yet to be rebuilt and the ones built are not affordable,” she said.

A section of Oyinlola market before it was completely demolished

One of the residents, who also spoke on condition of anonymity, expressed disappointment over the “insensitivity” of the local government for ”the questionable decision it took.”

“When will they learn to engage the community in their so-called dialogues or do they think that residents won’t feel the pains of this action?

“Did they stop to consider what our alternatives are?

Reacting, one of the leaders, “the Iyaloja General” of Amuwo Market, Mrs Osinatu Adebayo, told NAN that the reason given for the demolition was the unhygienic condition in the market.

“They said anytime it rains, sewage flows out from the back side of the market, a situation which had caused the traders to evacuate their shops.

According to her, the local government had notified the market executives about the demolition and proposed redevelopment of the market.

“We‘ve had several meetings; in fact we’ve had about six meetings at the council secretariat.

“In one of those meetings, I was angry. I reminded them that the market had received the neatest market award in the state in the past.

“They said the project would take four months and that after the redevelopment, those with allocation papers would be given first priority for spaces,” she said.

A source at the local government council, however, told NAN that the market was demolished because it did not conform to the standards of the Lagos State Market Regulations (LSMR).

According to the source, the council held several meetings with the market leaders concerning the nefarious activities taking place in the market, all to no avail.

“When the Commissioner for Local Governments and Community Affairs came for an on-the-spot assessment of the market about two weeks ago, he saw the living condition.

“He saw how the supposed market was converted into a residential place.

“This has been going on over the years. It has been labelled a black spot where hoodlums stay and other nefarious activities take place.

“Government cannot keep quiet and allow such things to happen in it’s domain. That is what gave rise to the need for the redevelopment of the market,” the source said.

Attempts by NAN correspondent to reach the local government Chairman, Mr Valentine Buraimoh, on phone proved abortive as his aide who picked the calls said he was attending a meeting.