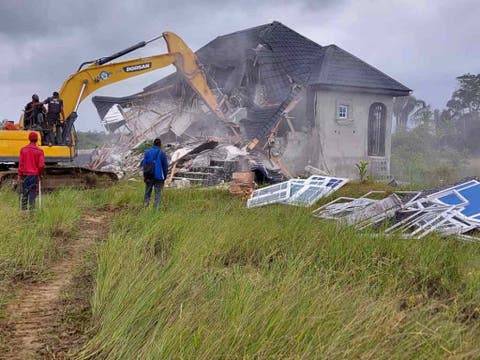 *We are homeless, sleeping in make-shift buildings – Affected residents

They had all retired to their respective beds, looking forward with great expectation to resume the next day’s activities.

Then, an incident that changed the course of their anticipation occurred, with the disturbing noise from what was later discovered to be an excavator. Time was 2 am. Sleep eluded them.

Some of them peeped through their windows to ascertain the mission of the excavator, only to behold the imaginable!

The excavator’s arm/wrecking ball was seen demolishing buildings, built after the pattern of those in the western world. Schools, worship centres and companies were not spared.

This was the scenario that played out in Oreki, Alahun village, in Eleko, Ibeju Lekki area of Lagos, on August 20, 2020. Today, what used to accommodate over 300 gigantic buildings is now a desert.

The affected residents are scattered round relatives and friends homes in Ajah, Epe and other parts of Lagos, with some of them living in makeshift buildings around Eleko, unsure of where help would come from.

The forceful ejection and demolition of houses according to the affected residents were carried out by the Lagos State Government.

Findings revealed that the residents were earlier issued notice to quit the 3,600square metre of land for the construction of a university.

But residents alleged that officials of the Lagos State Task Force on Environmental Sanitation accompanied some government officials, who carried out the demolition exercise, three days into the seven days ultimatum.

They disclosed that three persons had so far lost their lives owing to shock which sparked up underlying health conditions, since the demolition exercise.

They lamented that the forceful ejection and demolition of their houses had inflicted untold hardship on them, especially at a time when Nigeria and the entire globe was still grappling from the impact of the Covid-19 pandemic.

In an interview with newsmen, some of the residents claimed they had the Certificate of Occupancy of their respective buildings, adding that checks carried out before they procured the land from the indigenes, indicated that the area was not under government acquisition.

They further alleged that while the State Government claimed that demolished hectares of land were for public use, sales of some portions to private individuals were ongoing, in spite of a court order restraining both parties from carrying out any action on the land.

The traditional ruler of Oreki community, Chief Apena Adekunle, lamented that the forceful ejection and demolition of their houses had started brewing trouble, informing that those who bought land from members of his family were already demanding for refunds.

Chief Adekunle, said: “ As I speak, some persons have charged us to court over this action that is no fault of ours. We are 15 families that own Oreki village.

In 2015, the Lagos State Government told us that they wanted to build the University of Charity there but these 15 families took government to court. Since then, nothing had been said nor done.

We started suspecting there was more to government’s action, six months ago when we noticed that the name of the University was changed to Idera Scheme.

Our fears were confirmed after the forceful ejection and demolition of our houses.

They are now selling per 500 square meters for N 12 million to private individuals, after the demolition. This is unfair!

We have been calm, waiting for government to take the right position. If we resort to violence, they will address us as thugs. We have decided to toe the path of peace, by calling on Governor Babajide Sanwo- Olu, to intervene in this matter. We are homeless. Some of our people are sleeping in make-shift houses. What can be more traumatizing than this?

On his part, Mr Adebare Murfy, owner of a gas plant factory that was also demolished, said he lost over N1 billion. Lamenting the plights of the affected persons, he said “Infact, we have recorded three deaths since this demolition took place. how do you explain that?

Some of us bought the land from the customary owners, 20 to 30 years ago. I bought mine nine years ago where I built a gas plant factory which I operated with an Arab partner.

“There was no prior notice before the demolition. I was only informed that some officials of the Lagos State Government visited the place to survey it in January. This was followed by an unprecedented visit of the Task Force team on August 17, 2020, where they served us seven days notice to quit, only to come back three days later with excavators and swamp buggy to destroy 300 buildings in less than 24 hours.

“When we went to Alausa, they sent us away saying that the government wanted to use the land for Charity University but they are not doing that. We have sent our message to the governor but his staff insisted it’s public land and that government has taken over it

“After our properties were demolished, we went to the Epe High Court and got an injunction that nobody including the landowners and the state government should work or do anything on the land until the case is concluded but the state government has refused to abide by the injunction of the court. Rather, it is still selling out the lands to private individuals.

“We have C of Os of the land, but they were revoked by government officials before we were unlawfully ejected. This land does not belong to the government. All we demand is the refund of our respective lands, and for government to compensate those whose properties were destroyed”.

Murfy, informed that plans had been concluded to stage a protest to the governor’s office to make their voices heard.

Also on his part, Mr Segun Akala, who had his one-storey building among the houses demolished, described the action as immoral.

He recalled how occupants sacrificed to bring the community to its present state, only to be hijacked from them.

He said “I have had land here since 1999. At that time it was a bushy, low land and water-laden space. If you came at a certain time of the season, you could not go in. As at that time we bought from the family, we did due diligence and discovered it was not a committed land.

The Land Use Act of 1978 does not permit government to take land from Mr A and give to Mr B, the worst you can do is ask Mr A to ratify.

Infact government did not follow due process. We are not happy. You can’t displace people who have been here for 20 years just like that.

Is the government for the people? We were an organized estate. We worked on this land to bring it to the state it is today. I parted with two plots of land as my own contribution. Now government is coming to take over. I think it is immoral, it is wrong”.

However, when Chairman of the Lagos State TaskForce, CSP Yinka Egbeyemi was contacted, he said he was not aware of the demolition exercise allegedly by his men.

He was however quick to clarify that TaskForce would only show up in such instance to provide security to government officials carrying out the demolition exercise, emphasizing that it (Taskforce) would only embark on such security cover operation, when it received the directive, as part of its enforcement role.

He said “ Demolition exercise is not carried out before the mandatory 21 days notice. There is also room for 10 days extension. At times, we don’t even have a hand in such demolition exercise, like the one in question. But people will conclude it is TaskForce”.