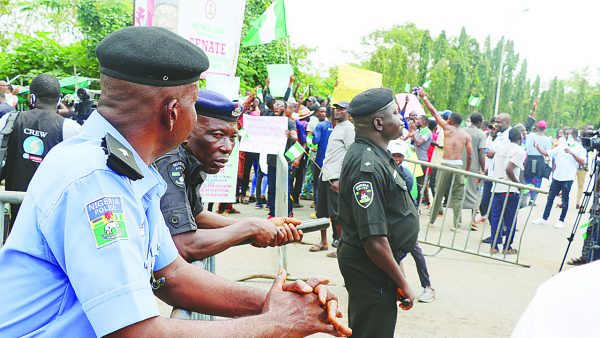 Information and Culture Minister Lai Mohammed’s recent call on Nigerians to empathise with the police and the other security personnel is demoralising; it puts the police at the receiving end rather than be on top of any situation. The police, in particular, cannot do a good job if they are afraid of the people as witnessed in the aftermath of the #EndSARS protests.

The call suggests that the police cannot rise to the occasion or that the police is handicapped, hence, the need for people to feel sorry for the force if that is what the Minister meant by empathise.

The Minister reportedly made the call while meeting with title editors of Nigerian newspapers in Lagos. He said many police personnel “are even afraid to wear their uniform and the result has not been pleasant in terms of security of life and property,” to which he charged Nigerians to “stop scaring the police off their beats.”

Lamenting the losses suffered by the security agencies in the wake of the #EndSARS protests, the Minister said six soldiers and 37 policemen were killed across the country during the crisis. He added that the violence left 57 civilians dead, 269 private/corporate facilities burnt/looted/vandalized, 243 government facilities burnt/vandalized and 81 government warehouses looted.

The question is why Nigerians are not scared by the police instead the police are scared by the people, according to Lai Mohammed? Are the police properly trained? Are they well equipped for the many challenges of law enforcement? Do they possess the necessary equipment for anti-riot operation for instance?

The spate of high-tech crime is an indication that the days of traditional policing are over. For the police to carry out their job effectively, their orientation must change. The days are gone when the police used baton to quell the riot. In this age of high-speed Internet computer system, when thousands of people could easily be mobilised within a twinkle of an eye using fast-track mobile communication systems, the police would have to be re-trained and re-equipped if it should carry out its job effectively.

Unfortunately, while modern crimes have caught up with us, the Nigerian police remain unchanged. It sees itself as the old institution dating back to the 1930s when the Force (NPF) came into existence. The training and modernisation needed to fight today’s crime are still alien to Nigeria.

Not long ago, a policeman reportedly stabbed a recharge card seller over N100! The policeman couldn’t forgo N100 simply because of poverty pervading the force coupled with a lack of training on how to deal with members of the public. The Nigeria police are handicapped, ill-prepared, ill-trained, ill-equipped to fight modern crime as the #EndSARS experience showed.

Once upon a time, I was passing by a street in Lagos. In front of a police station were some police officers sweating profusely trying to start one rickety Ford pick-up van, which apparently they wanted to use for the day’s operation. As I walked past the station, about four officers, with their guns hung precariously over their shoulders were fiddling with the vehicle to get it started. One was tinkering with parts of the engine; one was at the driver’s seat trying to kick-start it while the others watched in dismay.

About thirty minutes later when I passed again, the officers were now pushing the van on the road but the vehicle couldn’t start. The pushing of the vehicle on by about six armed policemen halted traffic in both directions of the road. The danfo drivers, Keke tricycles, and the ubiquitous commercial motorcyclists (okada), all kept their distance to make way for the police officers pushing their cranky vehicle because any slightest provocation could lead to assault in the circumstance.

Looking weary and fagged out, the officers re-opened the bonnet, touched one cable after another, and the kick and push continued. The vehicle didn’t start as I walked away. It was during the morning rush hour around 8.00 am.

The ugly scene of police officers pushing a rickety vehicle, which apparently was the only one available at the station, gave me serious concern. What if these officers had an emergency somewhere and here they were stuck sweating and unable to respond because of their faulty vehicle? What happens if the vehicle started and then stalls midway when the police might be confronting criminals? Where on earth do the police operate without healthy vehicles? How could an ill-equipped and ill-trained police personnel combat terrorism? How could they match modern computer-based crimes?

The above insight is just one out of thousands of similar cases that happen daily across the country. It is a common sight to see policemen stuck on the road following a vehicle break down. But if the above could happen in Lagos, Nigeria’s mega-city and arguably with high crime rate, what is the fate of police outstations in the rural areas? If a police station in Lagos has no good vehicle to respond to an emergency, how are the police in the rural areas coping? The regular massacre of innocent villagers in Kaduna and elsewhere by criminals and the inability of the police to respond show the gravity of the problem.

Nowadays, soldiers are frequently drafted to crime scenes because the police can no longer cope. The police have become vulnerable. A lot has been said about the failure of the police to contain the rising wave of criminality in the country but by taking a closer look at what the institution has turned out lately compared to other police institutions elsewhere, it would be seen that Nigeria police is among the most endangered in the world. I will start with the most fundamental issue.

First, the black uniform of the Nigeria police is not environmentally friendly. Nigeria is a tropical country with a hot humid climate. During the day, temperatures are quite high ranging between 32oC in the southern parts to 35oC in Kano, Sokoto, and Maiduguri areas. The combination of high temperatures and high humidity creates discomfort depending on what one is wearing. A black object absorbs all the radiant energy incident on it. Thus, any black uniform absorbs heat and discomforts the officers.

The authorities should consider changing attire. The sky-blue uniform worn mainly by the senior officers is better. As a matter of fact, any other colour would do but not black.

In this age of computers, how many policemen and women are computer literate? How many can conveniently work on the computer in the course of the investigation? Today, we’re in the age of cybercrime that requires expert knowledge of the computer. How many police officers can track criminals involved in cybercrime? As no institution is immune to hackers, do we have trained police officers that could track computer hackers and all manners of criminals who circumvent computer security to achieve their nefarious end?

The numerous unresolved murders are another example. Why is it difficult for the police to unravel the murderers? Apparently, the Nigerian police were not trained and equipped to handle such cases that require forensic analysis. While the police have existed for over 70 years, politically motivated murders have not been part of our experience. Besides, there is no database for the police to use in matching fingerprints or DNA. Sometimes, police experts have been imported from abroad to conduct a murder investigation without success. There is nothing the police officers would do, no matter his standing when the raw material needed to do a good job is lacking.

Finally, if this country is serious about fighting the kind of hi-tech crimes that plague Europe and America that have caught up with us, we must take the same steps they took in dealing with the menace. One of such is the creation of county police, which in our case amounts to state police. Amid the escalating criminal cases across the country, many state governors are lamenting that they have no authority over the police in their states. The police are controlled from Abuja, which has proved inefficient.