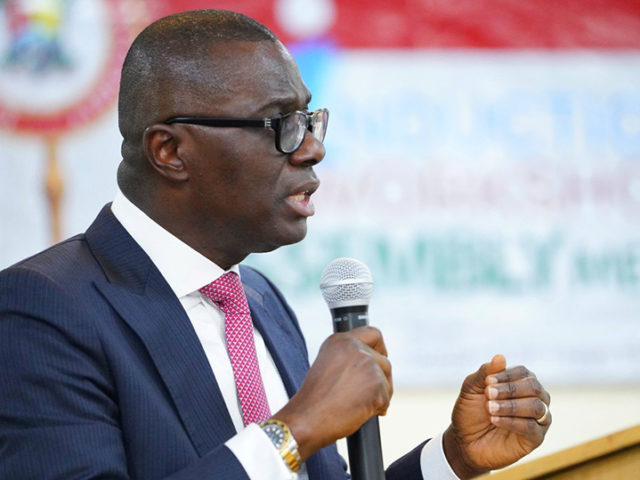 The Lagos State Government has advised estate surveyors to add value to property development through policy making and implementation process.

Governor Babajide Sanwo-Olu, spoke at the 50th anniversary of the state’s chapter of Nigerian Institutions of Estate Surveyors and Valuers (NIESV), themed, ‘We Build Cities’. He said the government desired a greater Lagos that compares with modern city in terms of affordable and decent housing for the citizenry.

The forum attracted foremost professionals in the built sector and representative of the Lagos state House of Assembly speaker, Mudashiru Obasa.

Sanwo-Olu said the state looks forward to a new era where quackery and other professional misconducts are put in check and clients protected through the rules and guidelines of professional association as well as legislation.

The governor, who was represented by the Senior Special Assistant on Housing, Mr. Ayodeji Amodu, noted that the real estate sector is now more structured and ethical as a result of practitioners’ continued commitment to high standard of professionalism.

He urged them to ensure excellence in their conducts in all spheres. Sanwo-Olu said the state government expects a greater synergy between practitioners and its agencies charged with regulating activities within the sector.

“The greater Lagos of our dream is one in which development is orderly and stakeholders are committed to upholding due process as specified in our laws. I enjoin your association on the need to be law abiding and discharge their civic responsibilities. I commend you for your cooperation with the state’s Real Estate Regulatory Authority (LASRERA) and keeping the dream alive for the past 50 years.”

In his remark, NIESV President, Sir Emmanuel Wike, expressed gratitude to the state government for the good working relationship between its members and government agencies in the area of asset valuation, property taxation and facility management.

He assured the government of the institution’s readiness for partnership in the area of land administration.

Wike appealed to the state government to exempt its members from LASRERA regulation as Estate Surveyors and Valuers Registration Board (ESVARBON) is empowered by an Act of the National Assembly to regulate the practice.

He assured the governor that the institution was ready to settle amicably with the state government on the matter.

The NIESV president also asked the practitioners to defend the profession and their competencies against onslaught of quacks and other professionals, who attempt to practice the profession without training or skills. He stated that members must learn to place the institutions’ interest first in all things.

Reminiscing on the journey so far, the Lagos branch Chairman, Adedotun Bamigbola, said that the challenges facing the profession for the next 50 years would bother on maintaining international ethical standards, research, property technology (Proptech) and infractions in the real estate sector.

These he stated, underscores the need for practitioners to take charge and evolve by making necessary professional impact on the society at large through value addition.

“We need to build on our rich history and the dedication of past leaders to confront challenges of the future”, he said.