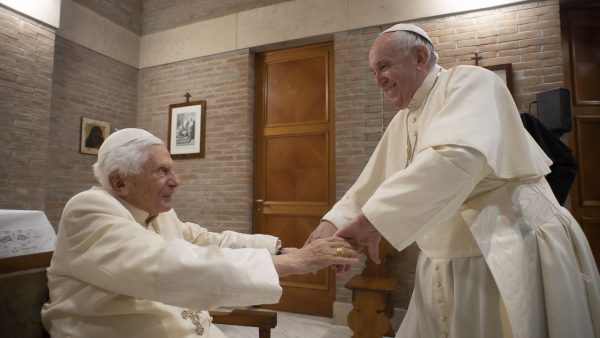 The former pope Benedict XVI has difficulty speaking but is still “lucid and smiling,” according to a new cardinal who met the 93-year-old at the weekend.

Mario Grech of Malta was one of 13 cardinals appointed on Saturday by Pope Francis.

Following the ceremony at St Peter’s Basilica, the new “Princes of the Church” as they are known met with Benedict, who stepped down from the papacy in 2013 but lives in a former convent inside Vatican grounds.

“It was a moment of joy for me to find myself with Pope Benedict, who believed in me and made me a bishop in 2006,” Grech said in an interview with Vatican News published on Tuesday.

“To see this priest, this man, with the years weighing on him, but at the same time lucid and smiling and with the will to communicate the spiritual experience he’s undergoing, encouraged us a lot,” Grech said.

“He has difficulty expressing himself, in fact, he said: ‘The Lord has taken away speech to make me appreciate silence.’ That’s how he began his speech.”

The former Josef Ratzinger, who has lived with a pacemaker since 1997 and is blind in his left eye, has appeared increasingly frail in recent months, but people close to the pontiff say he is still mentally sharp.

Despite limited mobility, he travelled to his native Bavaria in June to visit his ailing 96-year-old brother, Georg, who died the following month.