Lawyers Have Critical Role To Play In Solving Some Of The Global Challenges — NBA President, Akpata
Editor
December 1, 2020
4:18 pm 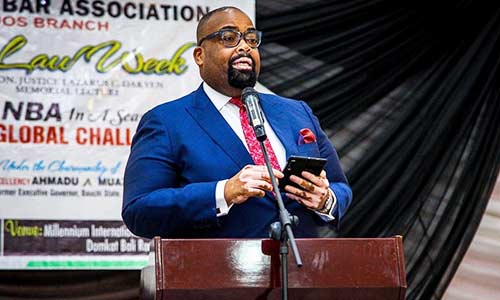 The Nigerian Bar Association (NBA) President, Mr. Olumide Akpata, has said that Nigeria has a role to play in bringing an end to the myriad of global challenges being faced today.

He said this in his Address at the NBA Jos Branch Law Week held on Monday 30th of November, 2020 made available to ASKLEGALPALACE.

Akpata, while addressing the topic: “The Nigerian Bar Association in a season of global challenges” commended the Jos Branch for keeping the tradition of the Bar by organizing the law week.

Before stating the role that lawyers can play in solving the global challenges, he first mentioned the challenges in question and made the covid-19 pandemic a starting point which came by the end of the first quarter of 2020 and “has left its destructive marks across virtually all parts of our globe with debilitating human and economic losses.” and Nigeria is “grappling with the economic consequences of the pandemic, with our economy now in a second recession within a short period of five years.”

Akpata also mentioned the mass protests by youths against the brutality of an arm of the Nigerian police force-FSARS, which has now been disbanded. He said the “protest gave fillip to what almost became a revolution, culminating in the ugly events of 20th October, 2020 at the Lekki Toll Plaza Lagos, with the shooting of defenceless protesters by operatives of the Nigerian military against all known rules of engagement.”

Other challenges he pointed out included the looting and destruction of public and private properties that followed the ugly event at the Lekki Toll Plaza, by ‘hoodlums’. “Not even our Temples of Justice were spared.” he said

He added, “The High Court, Lagos, and a section of the Lagos Division of the Court of Appeal were razed and desecrated, as Lady Justice stood in her famous blindfold. Indeed, that our country has been through a lot, is vindicated by the Judicial Panels of Inquiry sitting across various state capitals with a common mandate to unravel the extent of complicity of Nigeria’s law enforcement agencies, chiefly the Nigerian Police, in rights abuses, and compensation of victims of the #EndSARS protests and other forms of brutalities.”

On insecurity, Akpata said, “we have also had to contend with a never-seen-before spate of national insecurity in the form of banditry, kidnapping and insurgency. From Zamfara to Katsina; Benue to Taraba; Kaduna to Sokoto and elsewhere, we have seen how vulnerable our people have become to mindboggling killings by enemies of the State who would not rest on their killing spree while our over stretched security forces watch almost helplessly.

“The case of North East Nigeria, of course, merits a special mention. Less than 72 hours ago, no fewer than 43 rice farmers in a village just 20 kilometres to the Borno State capital, Maiduguri, were slaughtered by Boko Haram fundamentalists in their farms, in one of the most horrendous killings in the history of the insurgency yet.”

According to Akpata, most of the problems mentioned above occurred as a result of injustice which has been manifesting itself in the trampling of the poor by the so called elite, and the continuous failure of our courts to rise up to its foundational obligation as the last hope of the common man.

He said, “the perception of justice today by the mass of our people, is that it is a ‘social commodity’ reserved only for the highest bidders, in the society who can retain some of the brightest, ingenious, and sometimes, disingenuous lawyers to defend them, even when it is clear they’re on the wrong side of the law.”

He added, “Whilst this perception may not be completely true in point of fact, they nonetheless hold true among the common man out there on the street. And we the expression of same in the attack and destruction of courts, police stations and correctional facilities from Lagos to Edo; Anambra to Port Harcourt and elsewhere. All of these, should leave us with a moment of sober reflection, as stakeholders in the justice sector, on how we have gone about our respective duty to the high cause of justice. Have we been unduly overtaken by the material gains of our calling, while disregarding the social derivates of same to the larger society who look up to us for guidance and direction? This is one food for thought I hope would agitate our minds over the course of this event and beyond.”

Therefore, he said despite the challenges facing the country today as part of the global community, there’s a high role for the legal profession in solving the crisis and the roles are captured in both the RPC and the Code of Conduct for Judicial Officers

“I think our roles in this regard is quite clear. As advocates, it is encapsulated in Rule 1 of the Rules of Professional Conduct for Legal Practitioners thusly, ‘A lawyer shall uphold and observe the rule of law, promote and foster the cause of justice, maintain a high standard of professional conduct, and shall not engage in any conduct which is unbecoming of a legal practitioner’. As Judicial officers, it is as contained in Rule 2 A(1) of the Code of Conduct for Judicial Officers thus, ‘A Judicial Officer should be true and faithful to the Constitition and the law, uphold the cause of justice by abiding with the provisions of the Constitition and the law and should acquire and maintain professional competence’.

“My honest believe is that these are the minimum expectations of the society from us. And how we discharge them has a direct relationship with the future coexistence of this Nation, to the extent that no kingdom can survive with injustice, in the profound words of that great scholar.” Akpata said

The event had in attendance the Governor of the State, H.E. Simon Lalong, represented by the Honorable Attorney General of the State, Chrys Ahmadu, the Chief Judge of the State the Hon Justice Y. G. Dakwak; the former Governor of Bauchi State, H.E. Adamu Muazu, who served as Chairman of the occasion, NBA General Secretary NBA, Mrs. Joyce Oduah, serving and retired Judicial officers, khadis, and members of the Inner and Outer Bar.

Other Speakers at the event are Yakubu Bawa, the Chairman of the NBA Jos Branch who delivered the Welcome Address; the HAG of the State, who declared the Law Week open, on behalf of the Governor of Plateau State, and Prof Suleiman Bogoro, Executive Secretary TETFUND, who delivered the Keynote Address, as well as other Speakers and discusants.