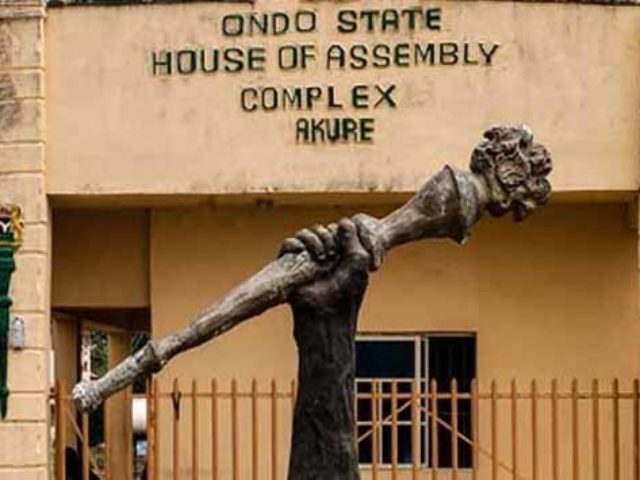 Speaker of Ondo State House of Assembly, Bamidele Oleyeloogun and three other members of the Assembly have been summoned by the State High Court over contempt of court.

They were summoned to show cause why they should not be jailed for disobedience to order of the court in a notice of court contempt filed against them in Akure by pro-deputy governor lawmakers.

The three other Assembly members who risk jail term for the disobedience were Clerk of the Assembly, Parliamentary Secretary, Abayomi Akinruntan and the Deputy Majority Leader, Oladiji Olamide Adesanmi.

A high court, presided over by Justice Ademola Bola, had ordered the reinstatement of four members of the Assembly who were suspended over their refusal to sign the impeachment notice against the Deputy Governor, Agboola Ajayi.

The four lawmakers, Iroju Ogundeji, Favour Tomomowo, Tomide Akinribido and Wale William-Adewinle, were ordered to be reinstated and paid N5 million each for their unlawful suspension from the Assembly.

However, the Assembly approached the Court of Appeal to halt the lower court order. But the appellate court in its judgment upheld the ruling of the lower court and ordered the reinstatement of the lawmakers and payment of their entitlements.

Aside reinstating the lawmakers, the Appeal Court judgment, read by Justice Oyebisi Omoleye, also ordered the appellants to pay N250,000 jointly and severally to the lawmakers as damages.

But despite the orders of both the lower and appellate courts, the four lawmakers have not been allowed into the Assembly nor paid their entitlements.

The four lawmakers, dissatisfied with the action of the House leadership, filed contempt charges against the Speaker and three others through their counsel, Mr. Olabanjo Ayenakin.

In the notice of consequence of disobedience to order of the court filed at the weekend, the lawmakers said unless the Assembly obeys the direction contained in the judgment of the court, they would be guilty of contempt of court and liable to be committed to prison.