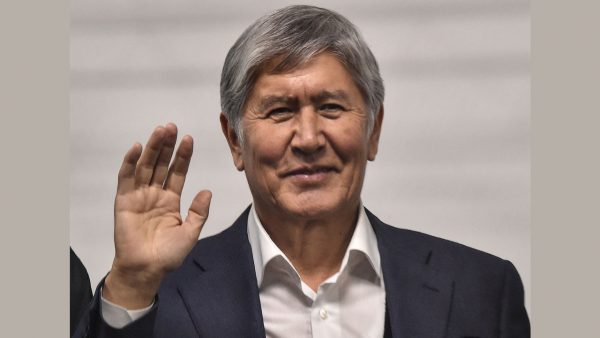 Former Kyrgyzstan President Almazbek Atambayev waves his hand as he stands inside a defendants’ cage during a court hearing in Bishkek on November 27, 2020. (Photo by VYACHESLAV OSELEDKO / AFP)

A court in Kyrgyzstan on Monday overturned the conviction of a former president who was serving an 11-year jail sentence and ordered his corruption case to be retried.

Almazbek Atambayev, 64, who served as the Central Asian country’s president from 2011 to 2017, was sentenced in June on corruption charges linked to the early release from jail of a notorious crime boss during his presidency.

Atambayev’s lawyer Zamir Zhooshev said that the court had reversed the verdict but that Atambayev would remain in prison for the time being.

“I think the district court will begin reconsidering the case next week,” Zhooshev told AFP by telephone.

Atambayev has always denied any guilt over the release in 2013 of ethnic Chechen crime boss Aziz Batukayev.

Batukayev was released on medical grounds before travelling to Chechnya, but the medical documents showing he had leukaemia were forged, Kyrgyz investigators said.

The charges against Atambayev emerged during his bitter power struggle with former ally and successor Sooronbai Jeenbekov, 62.

Jeenbekov in October became the third Kyrgyz president to resign over political unrest since the impoverished, mountainous country gained independence from the Soviet Union in 1991.

Atambayev was briefly freed from jail in dramatic scenes during the tumult that followed a disputed October 4 parliamentary vote but was re-arrested days later.

Another politician freed from jail amid the chaos, Sadyr Japarov, is widely expected to triumph in a presidential election set for January 10.

Japarov took on the roles of prime minister and acting president in the aftermath of Jeenbekov’s resignation but left both posts this month in order to compete in the elections, as demanded by the constitution.

Japarov, a 51-year-old populist whose supporters demanded last month that Jeenbekov step down in his favour, was serving jail time for hostage-taking at the time of his release.

Japarov has insisted that the conviction overturned by a court after protesters released him was a “political order”.